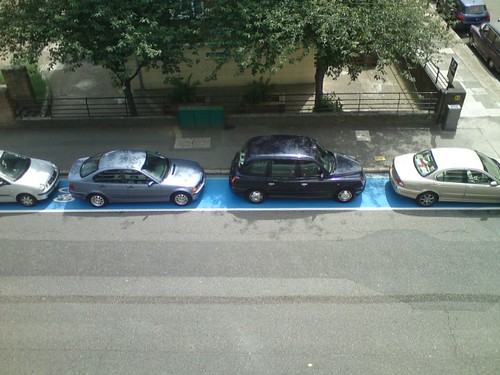 Want to reply? Log in or register as a new user • Send to a friend • Report message to moderator
beetroot
Monday 5 July 2010 8.41am

geoff holman wrote:
One trouble is that any 'rules' for drivers keeping out of the blue lanes have not been widely publicised - nor have the lanes any notices about any restrictions as to whether drivers can ever drive on them. For instance, with a blue lane within an existing bus lane, if it is legal for drivers to be in the bus lane at certain times - does this mean they can also be on a blue lane?

But Geoff's point still stands. The rules are unclear.

Bus lanes have hours of operation.
The only rules we have now is that these new cycle lanes don't operate during hours of unrestricted parking?
Want to reply? Log in or register as a new user • Send to a friend • Report message to moderator
phoney
Monday 5 July 2010 12.30pm
Instead of having a Blue Cycle Lane on both sides of a road, why not have a wide two-way one down the middle, with an orange waiting area at each juction where one could turn right/left as the lights allow. Maybe the lights could have a safe to turn <-- BICYCLE --> symbol. I take a massive bag to work on my bike, perhaps men have dinky bags but women carry their lives in their bags.
Want to reply? Log in or register as a new user • Send to a friend • Report message to moderator
ssimps01
Tuesday 6 July 2010 8.35am
Jerry is spot on. People with big manly bags should be allowed to park where they want.

But more seriously, the point people are making is about how painting the road blue has caused confusion.
The highway codes states that cars should not enter cycle lanes that are bordered with a continuous line.

But as Jerry, reasonably I think, points out, people still need to park. So if you paint miles of London's roads blue and remove parking overnight people are just going to ignore it.

Which, I think is Zoe's point. If people ignore cycle lanes and park in them, then cyclists don't ride in them - which is potentially more dangerous than no cycle lane. 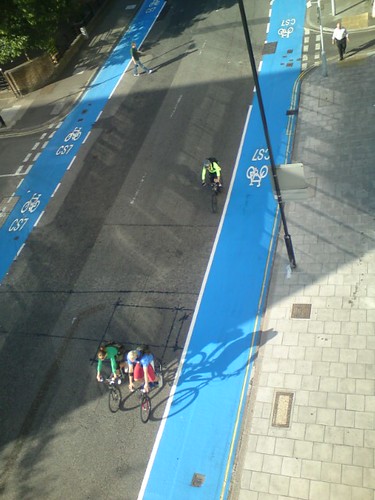