Pages:  PreviousFirst...6 7 8 9 10 11 12 13 14 15 16 ...LastNext
Current: 11 of 22
Perronetonian
Wednesday 19 March 2014 2.04pm
Remember that 10% increase in pedestrian journey times we've been banging on about here at www.ElephantandCastleRoundabout.org and www.SaveOurSubways.org. Well further analysis reveals this average disguises some pretty awful specifics. Journey times will actually increase up to 41%! Most routes will be longer, some by an indiscernable difference, a couple improved. Remember that regardless of overall length, that pedestrians will mostly have to pause will cause frustration vs their current ability to always be making progress towards their destination, all be it in a sometimes circuitous route because not all the subways follow a desire line. The attached graphic is TfL's with pink bits our annotation. 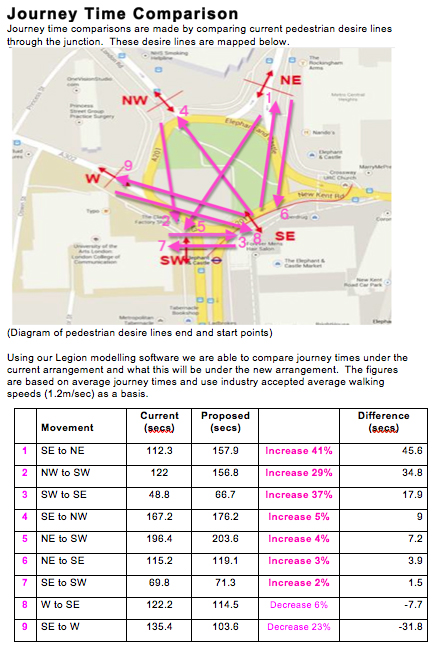 johnnytee wrote:
To come to a more accurate cost benefit analysis you will have to multiply the time changes by the numbers of people carrying out each movement.


jackie rokotnitz wrote:
Three cheers for Perronetonian for his tireless research! I agree wholeheartedly with his views but would never be able to do all those calculations! Thanks!

From looking at the plans it appears the new layout is far more pedestrian friendly. There are only a small number of crossings so the locations to cross the road are concentrated, compared to a labyrinth of subways!
And walking above ground compared to up and down stairs and round the houses. And a lot more space to mingle.

Even with waiting times at the signals - which is the only reason I can see why there should be these long delays for walkers - my "feeling" is that the new is better.

In no way can the current layout be considered a nice place! So maybe the figures dont tell the whole story.
Want to reply? Log in or register as a new user • Send to a friend • Report message to moderator
Perronetonian
Thursday 20 March 2014 10.18am
Johnnytee. If only the full story was shown. We have to press hard to get anything more than the publicised gloss and map from TfL. The current place isn't nice, no one is saying that, everyone wants improvement, there are plenty of us who want really radical change here not preservation. Opposing the proposal isn't an opposition to change. But we're just not hoodwinked by the artists' impressions, the politician's spin, the impatience for improvement and the sometimes nasty prejudices of those who can't see beyond grime.

The fact remains TfL forecast the new crossings to be slower for pedestrians in 7 of the 9 routes they measured, and particularly slow in some directions. Several key pedestrian desire lines (e.g. south side London road to the centre, from the Tabernacle to railway station and across New Kent Road closer to Newington Causeway) are ignored and require detours, so pedestrians still have to go 'round the houses' and pause to get from A to B or, as they will do, try their luck in The Ring road. Pedestrian casualties will rise. Remember TfL gets it wrong - in 2011 they removed the guard rails opposite the tabernacle in the spirit of fashionable de-cluttering and making the place nicer... they went back up within months due to the crazy behaviour from pedestrians despite the brand new surface level crossing near by (and of course the subway which is the most badly signposted on the shopping centre sign of the whole set of seven).

The subways are not a labyrinth. But there is a vast amount of excessively nonsensical labelling down there (why for example number the subways 2, 4, 6, 8, 10 and 12 rather than 1, 2, 3, 4, 5, 6, 7) and a severe lack of valuable information (e.g. even one simple basic diagram or map within the subways) that certainly causes confusion for those who have not got used to them. This is not the fault of the subways but the information designers.

But the most vocal fans of the proposed Bodge tend to be fit strong men (judging by their Facebook profiles), for whom zig zagging through traffic is a doddle, and won't be concerned about these dangerous details.
Want to reply? Log in or register as a new user • Send to a friend • Report message to moderator
Pages:  PreviousFirst...6 7 8 9 10 11 12 13 14 15 16 ...LastNext
Current: 11 of 22