Pages:  1 2 Next
Current: 1 of 2
bohrsatom
Sunday 25 June 2017 9.18pm
Looks like there is a new cinema opening in the old Vinopolis space at Borough Market - saw this application when out for a walk earlier today. 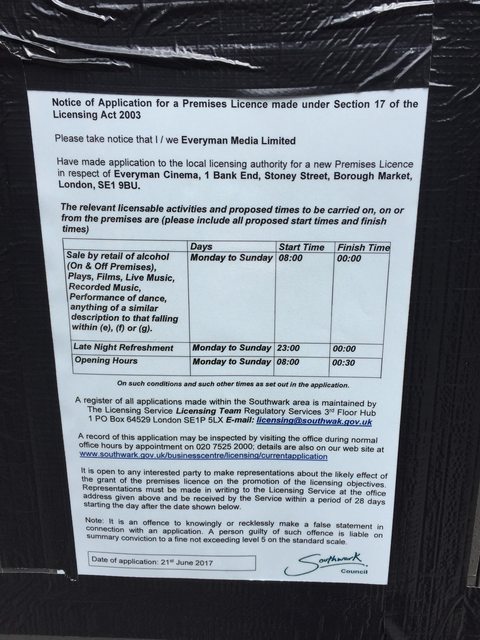 According to their website, Everyman are a chain of 'boutique cinemas'
Want to reply? Log in or register as a new user • Send to a friend • Report message to moderator

beetroot
Sunday 25 June 2017 9.49pm
I know it looks like a good idea at first but that company are very nasty and treat their staff like crap. Bit of a stain on the area.
Want to reply? Log in or register as a new user • Send to a friend • Report message to moderator
janefs
Monday 26 June 2017 9.44am

beetroot wrote:
I know it looks like a good idea at first but that company are very nasty and treat their staff like crap. Bit of a stain on the area.


For a bit of more informative background, the following is from an article about the expansion of the Everyman chain, published last year:

'The appeal of the boutique chains has been tarnished by rows over the use of zero-hours contracts and low pay. All the boutique chains have been criticised and Everyman continues to use zero-hours contracts, which do not promise regular hours to staff. Poor pay and conditions grates when punters are paying as much as Ł18.50 a pop to watch a film.

Lilly says dropping the flexibility of zero-hours agreements “could seriously compromise the efficiency of the business because of the way admissions come and go”. But the group has been experimenting with guaranteed monthly hours at its Birmingham branch and now plans to roll out the scheme to one or two other cinemas in the near future. “We think we could find a middle ground that will work well,” he says.'