The problem is that telephone boxes no planning consent, even if they are thinly disguised advertising hoardings. Westminister Council has started to object.
Want to reply? Log in or register as a new user • Send to a friend • Report message to moderator
Jules62
Wednesday 5 December 2018 4.51pm

rimby wrote:
This is a very interesting issue. I have been banging on for years about these old BT/other disgusting urinals/drug dens that used to be serviceable phone boxes, before mobiles came along. Along the New Kent Road I have counted 12! All disgusting, and never used. I have tried to get them removed as Southwark have been installing theses new phone charger bench’s, which are a welcome?. Apparently it is an impossible task to remove the old boxes as v expensive. Tough, they made money when they were installed. Trying to get anyone to take responsibility for them is impossible.Give it another 5 years and three will not be any pavement left to walk on. This needs sorting.


One of the NKR telephone kiosks is a K-2. As such, it is a listed building and cannot be removed.

I spoke to representatives of Lend Lease who are in the process of building Elephant Park on the site formerly occupied by the Heygate Estate: they told me that this kiosk has been a headache for them, and that they had to re-route electrical connections and water/sewage ducts to avoid interfering with it. 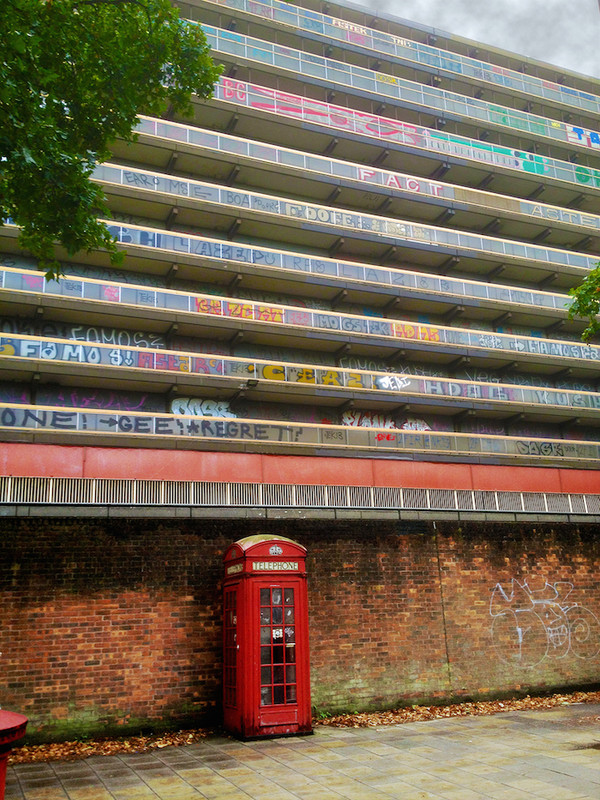 Some interesting info on the K-2 can be found here.
Want to reply? Log in or register as a new user • Send to a friend • Report message to moderator
rimby
Wednesday 5 December 2018 10.42pm
Hi Jules62,

I have no issue at all with the red boxes - love them. My issue is with those disgusting ‘grey’1980s BT and other random tel boxes that litter high streets, particularly NKR.

P.s. I don’t know how to attach a pic - I have many!
Want to reply? Log in or register as a new user • Send to a friend • Report message to moderator
Thebunhouse
Thursday 6 December 2018 12.51am
I didn't know my beloved and iconic red telephone box was called K2, I believe they should be shut permanently so that they cannot be used as urinals or drug dealing posts or adverts for prostitutes and should be painted/repainted and cared for as suits their iconic status.

Telephone boxes erected on the pretext that the impoverished locals need them is a nonsense.
When did a telephone communications company indulge in social welfare? This is a ploy to erect advertising hoardings and creates less room by adding to the already crowded footpaths with more street furniture.

I will be lodging my objections to those planned for The Cut. The widened footpaths have been lost to pedestrians with benches, tables and chairs for al fresco coffee drinkers and alcohol lovers, cycle racks and A advertising boards for the local cafes and bars/restaurants. 3 phone boxes from Short Street to Waterloo Road is an unwarranted and unwanted overkill.

None is the answer.
Want to reply? Log in or register as a new user • Send to a friend • Report message to moderator
Mary12345
Saturday 8 December 2018 12.56am
The New York Times recently published an article about this, of course it turns out to be a clever way around planning regulations, and a way of harvesting data and providing cheap advertising space.

"Under British rules that have effectively been in place since before the iPhone existed, phone boxes are still considered vital infrastructure, and companies with proper licenses can keep building them so long as local councils cannot credibly object to the particular site or design.


And so the phone companies set about to put up a new kind of booth: two-sided digital displays with internet connectivity and touch-screen maps that flash craft beer and credit card ads — and also have a phone attached.

“A lot of them are advertising totems with a telephone handset on it,” said John Walker, the director of planning for Westminster City Council. “They’re just a blot on the landscape.”

...because each of London’s 33 local authorities deals separately with planning, it falls to teams of local planners to sift through stacks of phone box proposals.

Mr. Walker said they arrive at his Westminster office in paper stacks dozens at a time, sometimes just before the Christmas holiday. Then the clock starts ticking: 56 days until, in the absence of an objection from the council, the phone company has the right to start work.

Establishing credible objections is a laborious process, forcing planners to solicit input from nearby businesses and traffic specialists. The phone companies often promise to remove two 1990s-era boxes for every new one they add, but Mr. Walker said Westminster did not want any, period.

Matthew Carmona, a professor of planning and urban design at University College London, said the situation “has, in a way, caught policymakers by surprise.” After removing phone boxes that fell into disuse with the rise of mobile phones, he said, “the phone companies have realized they can make money from them in a different way, and in doing that they can bypass any regulations.”
Want to reply? Log in or register as a new user • Send to a friend • Report message to moderator
Colinio
Tuesday 11 December 2018 8.03am
Objecting to each individual one on highways/access/safety grounds might work, the councils certainly don't like them but they need site specific reasons to refuse each, otherwise the "phone companies" can exercise their permitted development rights.

Government is consulting on removing the permitted development rights so these companies are having one last push to flood the streets with them: https://www.gov.uk/government/consultations/planning-reform-supporting-the-high-street-and-increasing-the-delivery-of-new-homes