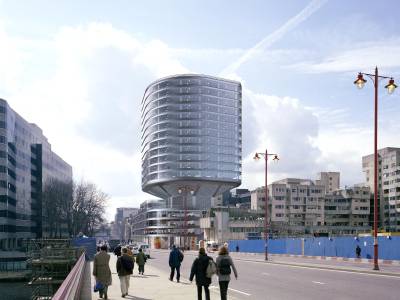 Do you mean the new Norman Foster development with that number on the former Sainsbury's HQ site covering the whole block:
http://www.tenblackfriarsroad.com/
see also news story on this site

Or do you have a specific enquiry about the individual nineteenth century address?
Want to reply? Log in or register as a new user • Send to a friend • Report message to moderator
Modigliani
Thursday 5 August 2004 12.56pm
Thanks Lang Rabbie., excellent website.

Was it Sainsbury's office's prior to development? Any other info on history would be appreciated.

Want to reply? Log in or register as a new user • Send to a friend • Report message to moderator
Lang Rabbie
Thursday 5 August 2004 2.11pm
May we ask why you want to know?

A century ago there was still residential use on most of the site - middle class houses on Blackfriars Road, and "the lowest class of prostitues and thieves" in side alleys such as Kings Arms Court.

There were two buildings on the site - Stamford House on the west side built c.1913 for Sainsbury's warehouses, extended in the 1920s with loading bays and subsequently converted to office use. Drury House was built in the early 1960s, occupied by part of Unilever for a time, and more recently occupied by Sainsbury's

I think Drury House was constructed set back on a diagonal from the former road line of Stamford Street as part of plans for a roundabout. Obviously it was never built (would have involved massive reconstruction of the railway viaduct?) and so there was just the filter lane and the flower beds.

IIRC the new Fosters scheme will reinstate the Stamford Street road line with a compensating new bit of open space to the north west - don't know what if any public access there will be.

I work in the area and keep seeing new development going up around me as I walk to and from work. So..............just interested in the history of these sites that's all.

You have an indepth knowledge of the area Land Rabbie thanks again
Want to reply? Log in or register as a new user • Send to a friend • Report message to moderator
James Hatts
Friday 12 November 2004 11.45am
Sainsbury's sells 10 Blackfriars Road


Editor of the London SE1 website.
Subscribe to our SE1 Direct weekly newsletter.
Want to reply? Log in or register as a new user • Send to a friend • Report message to moderator
Lang Rabbie
Friday 12 November 2004 1.51pm
If Beetham have paid Ł48million for the site, I reckon they may be punting that they can get away with an even larger development than Sainsbury's proposed!

Want to reply? Log in or register as a new user • Send to a friend • Report message to moderator
bod42zx
Friday 12 November 2004 4.22pm
James, do you know what the 'condition (s)' are for the exchange to have taken place?

I've been following this at a distance and heard that Sainsburys were having trouble selling it as the existing Foster design (particularly the floorplates) wasn't appealing to many of the potential bidders, including Land Securities. (A similar story at the gherkin, which is still mostly unlet due to difficult floor sizes and layouts.)

The new owners will no doubt re-apply with mixed use as residential is seen as the one sure way of securing buyers/tenants at the moment- whether this remains so in a year's time, will be interesting to see.