Pages:  Previous1 2 3 4 5 6 Next
Current: 3 of 6
wjfox2005
Sunday 9 January 2005 5.52pm
Sorry, I know this thread is about LBT but I couldn't resist posting this last rendering, which shows all of the skyscrapers planned for the City. A similar number of new towers are planned for Canary Wharf as well.

Note that LBT will far exceed the height of all these.

The spikey, medium-sized building to the right of this (which resembles the Sydney Opera House) is going up opposite the Lloyds Building and demolition is already underway on the current site.

You can see a full summary of London's new skyscrapers at this link: http://www.skyscrapercity.com/showthread.php?t=133890&page=1

Want to reply? Log in or register as a new user • Send to a friend • Report message to moderator
thomas
Sunday 9 January 2005 6.38pm
Here are just some of the useful links re:LBT which I've collated,
all found here on london-se1.co.uk website

other
http://www.londonbridgetower.com/
http://www.skyscrapernews.com/lbt.htm
http://homepage.mac.com/benveasey/.Pictures/lbt.jpg (Thanks Will Fox for Link)
Want to reply? Log in or register as a new user • Send to a friend • Report message to moderator
Lang Rabbie
Sunday 9 January 2005 7.24pm
I'm not sure that the renderings from Skyscraper News tie up with what I know of the site plans - if the shard is still going to be on the footprint of the current Southwark Towers.

Surely on the view looking west it should be further left in the picture (i.e. closer to St Thomas' St) - with the bottom of the structure close to the southern edge of the station trainshed???
Want to reply? Log in or register as a new user • Send to a friend • Report message to moderator
JonR
Monday 10 January 2005 10.52am 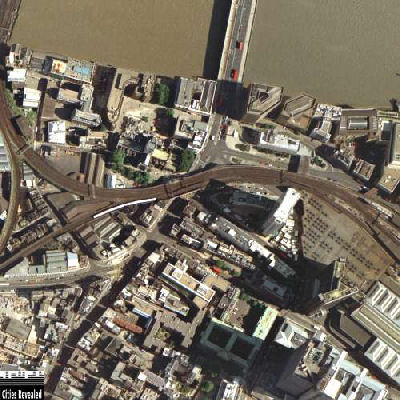 so on this image posted earlier - which one is it?

I thought PWC was the triagular one right on the corner of the bridge and the river..
so is it going to be the white one in the middle, or the two at angles to each other slightly further south east?
.. or all three?!
Want to reply? Log in or register as a new user • Send to a friend • Report message to moderator
markandjoan
Monday 10 January 2005 11.19am
It's all getting very confusing - a 2003 posting on this forum referred to New London Bridge House being demolished as well to allow space for this shard of glass extravaganza - that's 25 London Bridge Street (that's the name for the street you exit from the station on, in case you were wondering, NOT a street leading to London Bridge). So that's the white one in the middle and the two at angles to each other (officially 32 London Bridge Street) , as mentioned above.

"The removal of this building will provide more space at the base of the proposed 60-storey 'shard of glass' which would remove Canary Wharf from Britain's record books and also be the world's sixth tallest building. " 12 September 2003, London SE1 website team

hmmm... isn't there a rather large and busy bus station between the two of these?

All the lovely architects web sites show beautiful renditions of the finished building, but I can't find a plan that actually shows how much of SE1 is actually covered by the buildings perimeter...

Mark.
Want to reply? Log in or register as a new user • Send to a friend • Report message to moderator
Lang Rabbie
Monday 10 January 2005 11.23am
AFAIK the Shard would be on the site of Southwark Towers (32 London Bridge Street, which on the pigeon's eye view is "the two at angles to each other slightly further south east") and the adjacent former Red Star Parcels depot. (the missing corner of the London Bridge Station trainshed next to St Thomas St)

Edited to add: PwC no longer quote No1 London Bridge (the "triangular one on the river") as one of their office addresses - have they moved out or are they about to do so imminently?

other than to say the general public is a bit confused about
these developments ,

some people think the gherkin is the shared of glass,

and I have read news paper articals describing the gherkin as
the Heron Tower.