paulsimpson1976
Sunday 9 September 2007 11.15am
Does anyone know what is happening with the sign at the entrance to Potters Fields on Tooley Street?

Any ideas on what the deal is?
Want to reply? Log in or register as a new user • Send to a friend • Report message to moderator
James Hatts
Sunday 9 September 2007 11.58am
I made some enquiries when the blue paint appeared a few months ago and was told that it was guerrilla action by someone who believes that the plural is incorrect.

It will be repainted white at some point but it's not a priority for the park trust!

House style on this website is Potters Fields (fields in the plural, no apostrophe on Potters).

Although the current Southwark street sign next to St Olave's School says Potters Field I think the previous sign had an S on the end, and many old maps and documents going back more than 100 years refer to the street name as Potters Fields - see this 1862 map for example.

http://books.google.com/books?q=%22potters+fields%22+tooley
(a corresponding search for the singular returns just one result)

I have been meaning to ask at the Local History Library for an opinion on the 'proper' name.

Meanwhile the council seems to use every conceivable variation on the spelling in its documents and planning reports - often multiple versions in the same document...


Editor of the London SE1 website.
Subscribe to our SE1 Direct weekly newsletter.
Want to reply? Log in or register as a new user • Send to a friend • Report message to moderator
Lang Rabbie
Sunday 9 September 2007 4.39pm
Looking at those pictures, I've just realised for the first time that some designer was highly paid to decide that Potters should be in a heavier "weight" of lettering than Fields!

Yet the same design team allowed the shoddy bricklaying and pointing of the adjacent wall.
Want to reply? Log in or register as a new user • Send to a friend • Report message to moderator
Jonathan K
Sunday 9 September 2007 6.52pm
Found a map on this fascinating page of the wards of St Olave, St Mary Magdelen and Bermondsey dating from circa 1750 which definitely says Fields rather than Field! 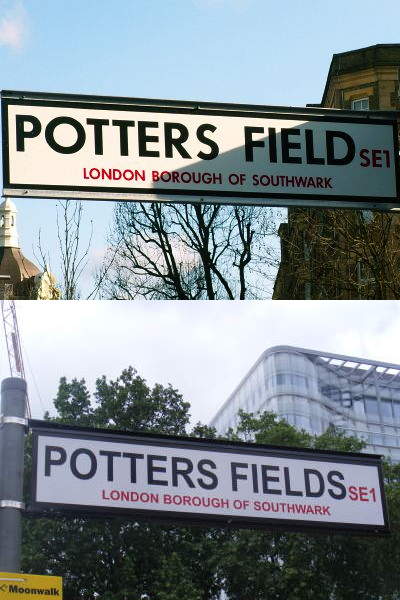 Editor of the London SE1 website.
Subscribe to our SE1 Direct weekly newsletter.
Want to reply? Log in or register as a new user • Send to a friend • Report message to moderator