Info on The Cut needed

Pages:  1 2 Next
Current: 1 of 2
kayleighwilson
Monday 10 December 2007 4.07pm
Hi everyone, finally found somewhere like this so hopefully you can help!

I'm researching The Cut for a project and I'm just looking for some opinions of the people living in or around this road, and any pieces of info/photos etc that I might have missed so far.

With Transport for London moving into Palestra in early 2008, that's potentially a couple of thousand employees in the immediate area, so I wouldn't be at all surprised if The Cut finds itself home to the usual sandwich chains and coffee bars to cater for them all, almost certainly at the expense of some of the independent retailers around there.

I think the Southwark end used to be called Great Charlotte Street, and the Lambeth section The Cut.

As a resident of the The Cut, I'll be really pleased when all this work is finished, it hasn't been that pleasant to live through.
Want to reply? Log in or register as a new user • Send to a friend • Report message to moderator
nelson_
Monday 10 December 2007 9.47pm
I was under the impression it used to be called the cut market, meaning that part of the market was on Lower Marsh and the market was cut in two by Waterloo Rd... could be totally wrong as well :)

Been following the refurbishment, that I think was meant to be finished by August according to some blurb. Some things have seemed a bit crazy, like the fact that they put the new paving slabs on almost all the way just to dig new holes for new lamp posts. Then they came back and dug holes for new trees after emoving all the existing ones.. now I would have put in the trees and the lamp posts in first and then paved around them, but obviously I am not a designer. At least they did most of the old water pipes first.

Then BT came in and dug up our phone lines at some point..

I'm sure it will be fab in the end, however I think the pavement stones are very light in colour and will very soon look dirty unless the councils start cleaning them more often.

http://www.ideal-homes.org.uk/lambeth/lambeth-north/new-cut-market-1933.htm
Want to reply? Log in or register as a new user • Send to a friend • Report message to moderator
Zoe
Monday 10 December 2007 9.57pm
What a fabulous photo, thanks Nelson. 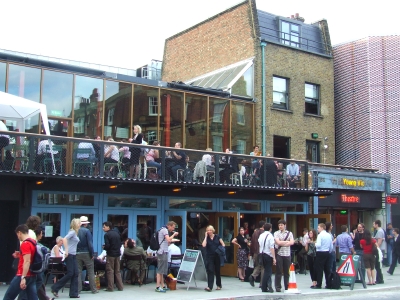 Looking at this image, I would agree with Zoe as to where the original was taken from. The building that now forms part of the Young Vic is almost certainly one of the 2 shops that can be seen just off-centre in the 1933 photograph. It would be great to see a 'Then & Now' photo of this scene.


The Boss,
SE1 Relocation Ltd
E: oliver@se1relocation.com
W: http://www.se1relocation.com
Want to reply? Log in or register as a new user • Send to a friend • Report message to moderator
moriarty
Tuesday 11 December 2007 10.44am
From Wikipedia...

'...The Ring public house, above which is a boxing gymnasium. It is here that the Marquess of Queensberry allegedly wrote the modern rules for the sport of boxing.'

I like living by The Cut as there is so much there and the roadworks have stopped the rickshaws going down Greet Street at 2am which is nice.
Want to reply? Log in or register as a new user • Send to a friend • Report message to moderator
Pages:  1 2 Next
Current: 1 of 2