Pages:  1 2 3 Next
Current: 1 of 3
Tolstoy
Friday 16 May 2008 4.54pm
Screwed to the back wall of Chas bikes on Gt Suffolk St, this green mismatch of bits of wood has been in place since the forties and alas is soon to disappear following the purchase of land it sits upon.

Does anyone know it's history? I've built a copy of it within the online computer game Second Life, along with other lost/soon to be environments as part of an ongoing documentation of the area.

I am hoping to be able to save the building so that it might be displayed as an exhibit for an exhibition focused on local community values and changes within an area with ongoing 'regeneration' projects. 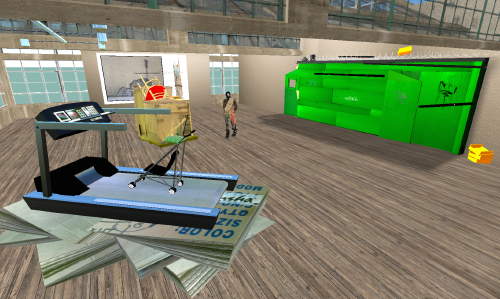 Here's how the hut looks in the game. I'm using Second Life as a format for curating these 'spaces', the advantage over simple photographs being that you can walk around them. The box was the former home of George who slept in the railway arch next to Union Gallery and opposite the Jerwood Space for more than thirty years I'm told and although I've changed it now, the picture on the back 'wall' was taken on Copperfield St.

Tolstoy wrote:
O-kay, well that sunk like a lead weight:)


Not sure what you were expecting - do we all need to build Second Life avatars to go and look at your version in more detail???
Want to reply? Log in or register as a new user • Send to a friend • Report message to moderator
Tolstoy
Thursday 22 May 2008 7.20am
Not at all, I was more interested in finding out about the hut itself and looking to share stories of other buildings in the area which are being lost to development like the Smoked bacon factory, the warehouse next door to it and other oddities such as the outside toilet that until a year or so ago stood outside the pub on the corner of Union St/Great Suffolk St.

I've always enjoyed walking through this area as it seems to have been one of the last forgotten areas for change, with the odd remnants of former buildings still standing as pieces of wall with glazed tiles jut into the street, the old paint factory, now a car park, formerly offices for the railway and originally a bedstead making factory, according to Victorian maps.

My intent with Second Life is simply to give these places a new 'home' and share their uniqueness with an international audience whilst seeking to document the social change they represent.

The posh office part was up rickety wooden stairs, full of individual offices made of wood and glass. The general manager was a Mr Ramsay, who wore a homburg hat, dark overcoat, carried a rolled up brolly and a briefcase, he sported a large gingery brown moustache which he waxed and curled at the ends.

When I first met him he terrified me, but behind that RAF type exterior he was a very kind man. The office was wallpapered with brown cardboard boxes which contained clients files and when there was no space available downstairs, files were transported upstairs into an attic type room. Hiding away from the bossy people downstairs I would frequently disappear mid the dusty files , would pore over all the old letters and thought I would be terribly help ful if I sorted out some large drawings and maps..
Big one end...little ones the other end of the racks. It took them weeks to sort them out! sorry I was only going to mention another place of interest near the tea hut..which was just round the corner from a place where you could go lunchtime for a cheap meal...large building run by some sort of charity!
Want to reply? Log in or register as a new user • Send to a friend • Report message to moderator
Tolstoy
Thursday 22 May 2008 8.00pm
Ha! Thankyou Jan. You've solved a mystery that I've been trying to unravel for some time. I've spent an age trying to work out the faded signage on the wall of that building; squinting my eyes, taking photographs at different angles/time of day, filtering through Photoshop, etc and could only ever get the 'C. Isler artesian....', so that's who they were. Did it extend to the whole of that site, down to Dolben St which has a nice triptych of building materials (hopefully I can post a pic) which faces a bare patch of land?

I also find the rather elaborate architectural feature of white corner stone amusing, can someone explain why it looks like this, at the junction with Trevaris St/Bear Lane.

The company sounds fascinating, what exactly were they drilling for/who?
Want to reply? Log in or register as a new user • Send to a friend • Report message to moderator
Pages:  1 2 3 Next
Current: 1 of 3