Pages:  Previous1 2 3 4 Next
Current: 3 of 4
JimC
Saturday 2 December 2017 12.19pm
Thanks, Robert Emmerson and Griff King-Spooner for joining me on my Memories of St Christopher House facebook page. It feels a little less lonely there now! :-)

Anyone else interested in joining us to reminisce and share memories of working there in MoD or MoT or its successors, between circa 1959 and 2003, you will be made welcome!

Even if you didn't work there, you may have memories of the effects of working/living in the vicinity of that massive late 1950s structure that you may want to share.

The building was there for over 40 years, and thousands of staff will have worked there during that time. The facebook page is there for those who wish to to to share their memories.
Want to reply? Log in or register as a new user • Send to a friend • Report message to moderator
JimC
Tuesday 5 December 2017 7.54pm
I just found this 1952 aerial photo of Bankside power station and the CEGB HQ building under construction. Note the virtual absence of buildings on the site of SCH and its successor buildings! 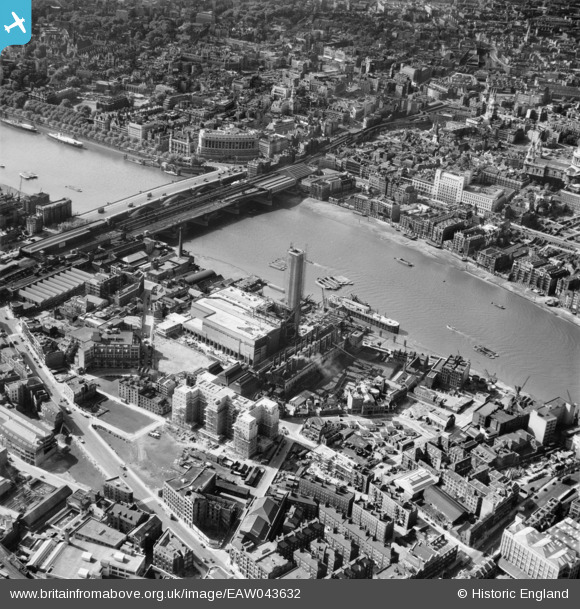 You might want to join us over on the Memories of St Christopher House facebook group https://www.facebook.com/groups/239148686526617/
Want to reply? Log in or register as a new user • Send to a friend • Report message to moderator
JimC
Wednesday 6 February 2019 4.52pm
Another mention for the Memories of St Christopher House facebook page - all with memories (good, bad, indifferent) of that monolithic post-War block are welcome to come and join us and share your memories!

Another mention for the Memories of St Christopher House facebook page - anyone with memories (good, bad, indifferent) of that unashamedly unattractive office block is welcome to come and join us and share your memories!

Tolstoy wrote:
I have the following objects from that building: two window blinds, a wooden toilet seat, three glass cylinder light covers (from the 50's style electric generator room), two wall clocks, a since-departed cheese plant from the original reception area and a huge fire bell cover from the exterior of the building. Also had a nice drawing board from there at one point, but since gotten rid of. It was a lot of fun roaming around the site as it was being demolished.
I'll look up the page.

Did you ever look up the facebook page? Did you join us?

All the best, JimC
Want to reply? Log in or register as a new user • Send to a friend • Report message to moderator
Andyboy
Thursday 7 November 2019 5.44pm
Hello - not in my wildest dreams would I have visualised discussing St. Christopher House with anyone in any medium!
I worked in it from 1966 to 1970. I was a teenager, this was London which is huge, the building was huge, people everywhere, this was exciting.
The M.o.D. occupied Ground floor to 10th floor of the West wing
My two Departments were (a) the Directorate of Ammunition Production and (b) the Directorate of Army Contracts:
(a): D.Amm.P (Gen)(A)(i), D.Amm.P (Gen)B(ii) (which overlooked Southwark St.), D.Amm.P (MT) (i) (with a view towards Bankside Power Station). All on the 2nd floor.
(b): AC9(b) (later DC50(2), Room 7149 phone Wat 7999 ext. 3806 with a good view of the power station. I remember a very entertaining project of renewing the flues in the chimney and a large banner reading "Head Wrightson are engineering."
What a joy it was that, after de-commissioning and years of dithering, it was announced that it would be saved and become Tate Modern!
At street level to the East of the main entrance was an integral parade of shops among which there must have been one which provided lunch, a hairdresser, then a combined Travel Agency and record shop - the latter was a popular venue to meet and hear records: we drove the poor bloke to distraction I should think.
Speaking of lunch, on the top floor was a good canteen serving good grub and we had an hour to enjoy it! No E.U. Directive limiting workers to a 20 minute break if sufficient hours had been notched up. I can hear the pleasant Scotswoman at the till often enquiring, "Do you have wee hapney, my love?" when giving change.
Having dined we could go up on the roof and socialise. One summer day someone let slip that a large aircraft builder was about to go under. He told me which one as I was a bit of an aero-crank, and a few days later it was announced as Handley Page. So upsetting.

To the west a couple of hundred yards were a few other shops and among them a tannery - Gor blimey, Guv'nor - the stink on a bad day!