Southwark Cathedral's new resident cat was introduced to the congregation at the end of the Sunday morning Choral Eucharist. 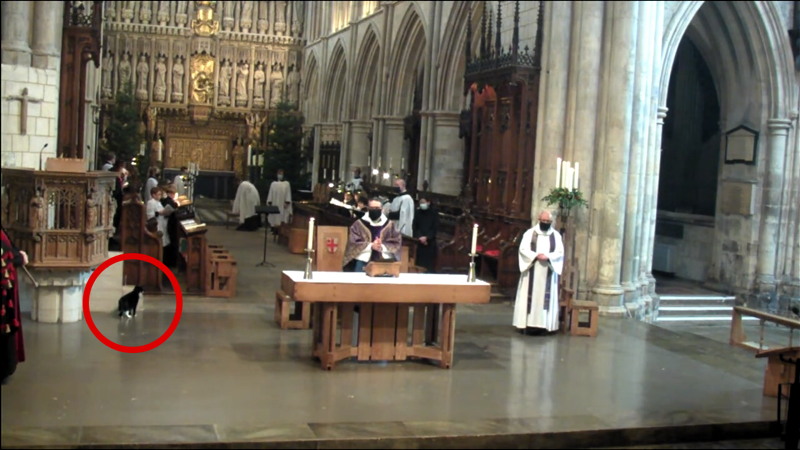 Two-year-old Hodge arrived at the cathedral this autumn, by coincidence on the same day as the death of Doorkins Magnificat, the former cathedral cat who retired from her duties last year after a decade roaming the cathedral.

The thanksgiving service for Doorkins – which attracted worldwide media attention and a degree of controversy after it was criticised by a bishop – has now been viewed at least 60,000 times across YouTube and Facebook.

Hodge came to the cathedral from the Catcuddles Sanctuary in Bexley, having been brought to the charity by a woman who had become concerned about a cat with a facial deformity she had spotted whilst on her way to work.

The swelling was found not to be cancerous and was treated with antibiotics by Catcuddles who then set about seeking a new home for Hodge.

He has been in residence at the cathedral for the past couple of months but news of Hodge's arrival has been kept under wraps whilst he acclimatised to his new home.

"He's extremely lovable," said the Dean of Southwark, the Very Revd Andrew Nunn, as he introduced Hodge to the congregation on Sunday morning.

Hodge shares his name with the cat owned by Dr Samuel Johnson. Dr Johnson's cat is immortalised with a statue in Gough Square off Fleet Street.

Southwark Cathedral has a stained glass window commemorating Dr Johnson, who was familiar with Bankside through his connections with the local brewers the Thrale family.