Archbishop of Canterbury Justin Welby came to Southwark Cathedral on Friday to mark the 850th anniversary of the final London sermon of his predecessor St Thomas Becket who preached in the building before returning to Canterbury where he was killed. 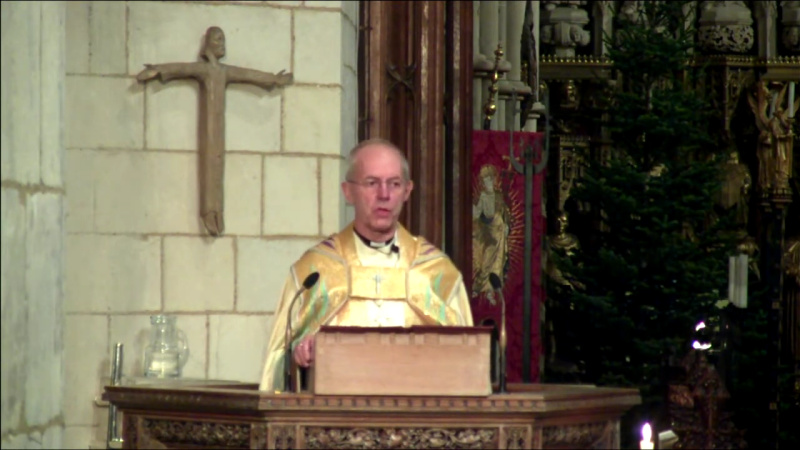 Justin Welby in the pulpit at Southwark Cathedral, 850 years after his predecessor Thomas Becket preached a sermon in the same building

Friday's special service of Choral Evensong commemorated the anniversary of Thomas Becket preaching at the Priory of St Mary Overie, now Southwark Cathedral, on 11 December 1170 before heading out of London for Canterbury and his subsequent martyrdom in Canterbury Cathedral on 29 December 1170.

"Back in the Middle Ages, Southwark and Winchester were starting points for pilgrims making their way to Canterbury," said the Dean of Southwark, the Very Revd Andrew Nunn.

"We have a long association with this period of history. Chaucer's Canterbury Tales mentions Southwark in its opening.

"This was the very last place where Becket preached. We wanted to mark this part of the story with a special service."

A relic of St Thomas Becket, which is kept at Southwark's Roman Catholic St George's Cathedral, was brought to the Anglican cathedral for the occasion.

In his sermon, Archbishop Welby urged today's church to draw on Becket's example of courage in facing up to secular authorities.

He said: "When children go hungry in 21st century Britain, we must speak – because God says so in scripture. We heard it in the Magnificat just a few moments ago.

"When aid to the world's poorest is cut, we must speak – because Christ commands a bias to the poor, not the trickle-down theory of economics; to love our neighbours like the Good Samaritan did when the 'neighbour' was just a human being in trouble from an enemy country of which he knew little.

"When the refugee or the immigrant are vilified. When a Muslim woman cannot go on public transport without insult, or a Christian cannot read a bible without persecution. When a man has his neck knelt on till he suffocates. When a pastor is arrested for speaking of Christ, the Church of that and every country must say this is wrong, whatever the democratic vote or popular thinking or Government collusion."

This service was supposed to be the last in a series of 850th anniversary events during 2020, but the pandemic caused most of them to be cancelled.

Thomas Becket was Archbishop of Canterbury from 1162 until his murder in 1170. He is venerated as a saint and martyr in both the Anglican and Roman Catholic churches.

St Thomas' Hospital was originally dedicated to Becket, although the dedication was changed to St Thomas the Apostle after the Reformation.