Changes to the proposed redevelopment of the Elephant & Castle Shopping Centre site - including a reduction in the space allocated for a potential cinema - have been approved by Southwark councillors. 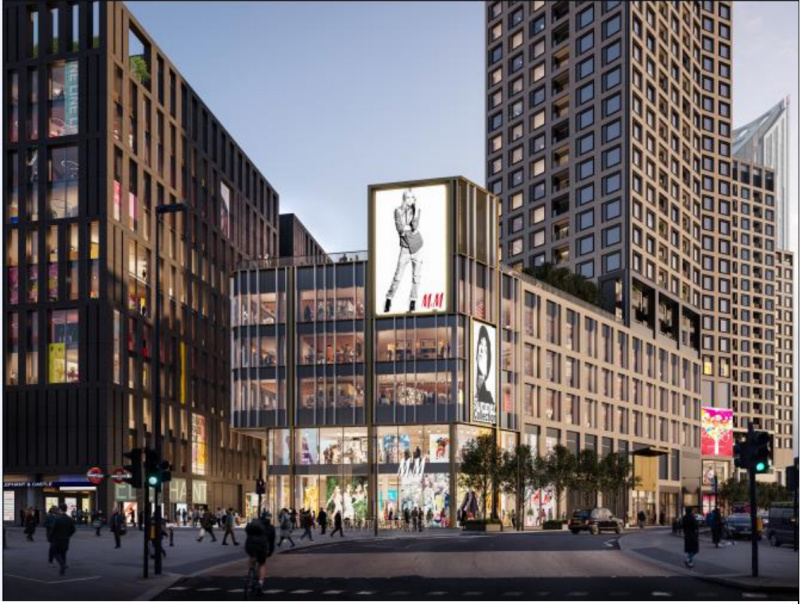 Demolition of the shopping centre – which closed in September 2020 – is now in its final stages.

On Tuesday night Southwark Council's planning committee approved amendments to Delancey's existing planning permission to develop hundreds of new rental homes, shops, offices and leisure venues on the site, along with a new building for the London College of Communication (LCC).

The developer wants to amend the mix of uses in the scheme, including introduction of new office space and a reduction in the space intended for a cinema.

Whereas the previously approved scheme envisaged an eight-screen cinema with around 1,000 sites, the latest plans now cater for a six-screen venue with 500 seats.

The revised designs also see some space previously earmarked for retail reallocated for educational use by the LCC.

Changes to the housing mix include seven more affordable homes and three fewer to be let at market rent.

Planning officer Victoria Lewis advised councillors that the proposed new office space was a welcome addition to the mix: "The working population which it would introduce would help to support the shops and services in the local area by increasing footfall at a time when high street shopping is facing significant challenges."

Jerry Flynn of the 35% Campaign addressed the committee to ask questions about the funding arrangements for the affordable housing in the development and raise concerns about the transparency of the viability assessments.

The new development will be managed by Get Living, whose chief executive Rick de Blaby spoke at the meeting in support of the proposed alterations.

He said: "It is now five years since the original masterplan was conceived.

"Research, experience and over 35,000 resident feedbacks [sic] compel us to respond to the changes in the way people now live, work, shop and socialise, seeking to empower our residents and the wider community to live their best life which lies at the heart of the Get Living ethos."

He added: "These changes are not massive ones. You could call them tweaks. But added together they will deliver a series of significant improvements for residents, retailers, visitors, those who might work here and the local community alike."

A representative of Delancey confirmed to councillors that they are close to securing funding from the Greater London Authority towards the provision of affordable housing in the development.

John Otagburuagu, owner of Black Cowboy Coffee – formerly based in a horse box outside the shopping centre and now located at Elephant Arcade – urged councillors to approve the changes to Delancey's scheme. "Our community has been lacking investment for far too long," he said.

Speaking of his own business, he added: "I would very much like to grow and thrive within this new Elephant & Castle."

Councillors resolved to approve the variation to the planning permission with six votes in favour and one abstention.