Peabody ‘sorry’ for series of ceiling collapses on local estate

Residents of a Peabody estate in Southwark have spoken of their fear after at least seven ceilings collapsed in four homes. 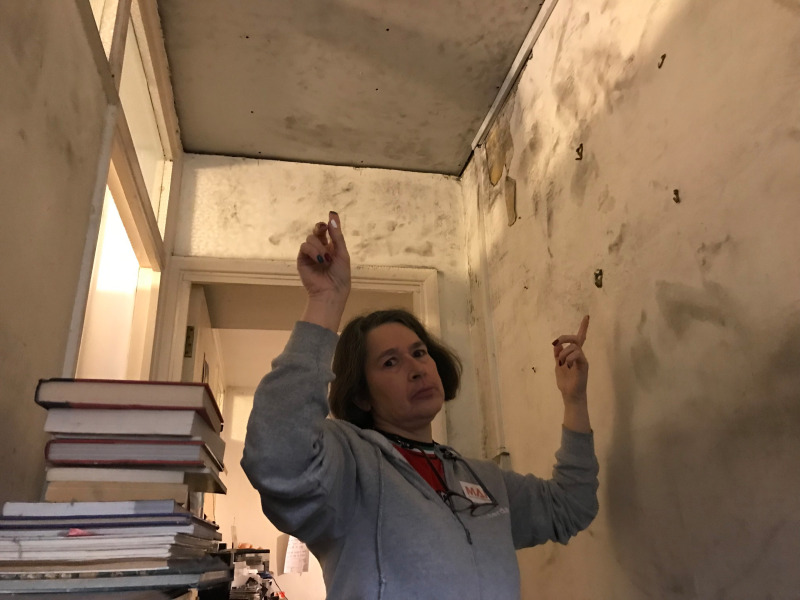 Nicola Branch demonstrates some of the damage in her flat

Nicola Branch was forced to go to hospital after her ceiling collapsed at her Southwark Street flat for a second time in October.

Residents say ceilings have collapsed in four flats in the 14-home block on the Peabody Southwark Street Estate and they are still dealing with the damages. The flats are owned by Peabody Housing.

Two months after her ceiling collapsed, Nicola's flat is still covered in an inch of grime and she claims she has been struggling to breathe because of it.

The 56-year-old said: "It was an absolute nightmare. I got back here at 11pm and I couldn't get in as there was ceiling all over the floor.

"I had to go to hospital because my breathing was so bad. I was coughing constantly."

Nicola had been away for a month, visiting her dying mother in her last moments.

Now her walls are coated in soot and her possessions have been spoilt.

The soot has even extended down her corridor and outside her neighbour's front doors.

Nicola says her situation was made worse when a Peabody worker tried to fix the ceiling.

She added: "When the ceiling fell there was nothing but soot that came down.

"The walls were white before. It's all full of soot.

"I don't want to touch anything. I'm forever washing my hands."

Now cracks are beginning to appear in Nicola's living room ceiling and she is afraid it will fall down once more.

Around 10 years ago her ceiling collapsed in her bedroom after a leak.

Nicola was forced to stay in a hotel for four weeks at the time and is scared she may have to leave her home again.

She added: "It's started cracking and that is what happened when my ceilings collapsed before.

"This will happen again I'm sure it will."

According to Nicola four flats have had their ceilings fall down in the Peabody managed block.

Neighbour Henrique Figueiredo was left unable to walk after three of his ceilings collapsed in his home in 2013.

He told the Local Democracy Reporting Service: "I had to go to hospital. They had to operate on both my legs.

"The only way I didn't feel pain was when I sat sideways in bed."

Henrique returned home from St Thomas' Hospital to find ceilings had collapsed in his bedroom, toilet and corridor.

Henrique added: "In the 16 years I have been living here I have heard this happen to lots of people.

"It's an accident waiting to happen. People have families with little children. If it collapses it could cause serious injuries or even death."

A Peabody spokesperson said: "We are very sorry for the distress caused by this incident and have carried out a full investigation into why it happened.

"We made the hallway ceiling safe on the same day this was reported to us and agreed that we would come back and carry out the necessary repairs at a convenient time for our customer.

"At her request, this was arranged for December 7, and we will be visiting the property today to complete the works."

The spokesman added: "We are very sorry for the distress caused by this incident and have carried out a full investigation into why it happened.

"We made the hallway ceiling safe on the same day this was reported to us, and agreed that we would come back and carry out the necessary repairs at a convenient time for our customer. At her request, this was arranged for 7 December, and we have now visited the property and agreed a programme of works.

"We want our residents to feel safe and secure in their homes and are sorry to hear of these reports. We take these concerns very seriously and will be sending a surveyor to investigate any further issues in the building."