Detectives investigating the murder of a 23-year-old man in an Elephant & Castle restaurant have used the BBC's Crimewatch Live programme to share CCTV images of two men they would like to trace. 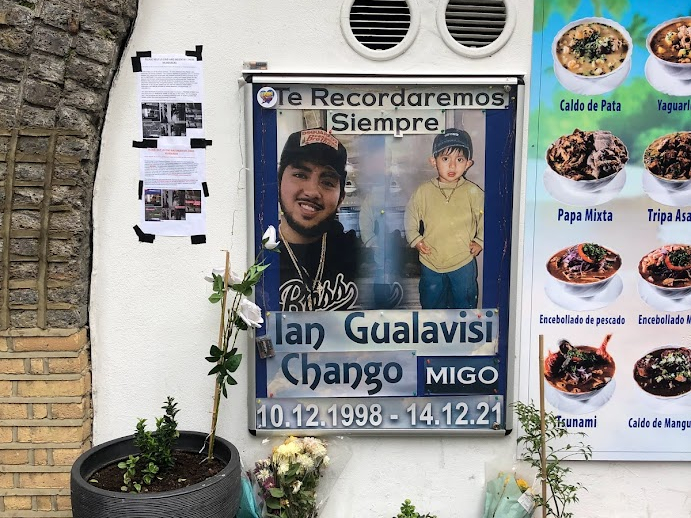 Tributes to Ian Gulavalisi outside the restaurant where he was killed

Detective Chief Inspector Chris Wood told Crimewatch Live last week: "Ian was just embarking on a new phase of his life as restaurant manager at his family's restaurant in the Elephant & Castle in London ... Just after 7.30pm two men arrived on a stolen moped, rushed into the restaurant and attacked him with a very large knife and fatally wounded him at the scene.

"His mum was present, as well as some other regular diners as well."

He added: "Afterwards they get back on that stolen moped, they then travelled at speed through Burgess Park and eventually that moped was found a few days later burned out in Picton Street on the Elmington Estate."

DCI Wood continued: "Ian's family are still heartbroken as you would imagine.

"This is a close knit Latino community right there at the Elephant & Castle. And people that knew Ian are still feeling the effects of his death."

Asked what he would say to anyone who had information but had not yet come forward, he replied: "I'd say just pick up the phone. We can deal with anything anonymously. Call this programme, call Crimestoppers. We just need a name. We'll do the rest. It never needs to be revealed where that name has come from."