Controversial plans to replace the former ITV studios on the South Bank with a new office block have been approved by Lambeth's planning applications committee. 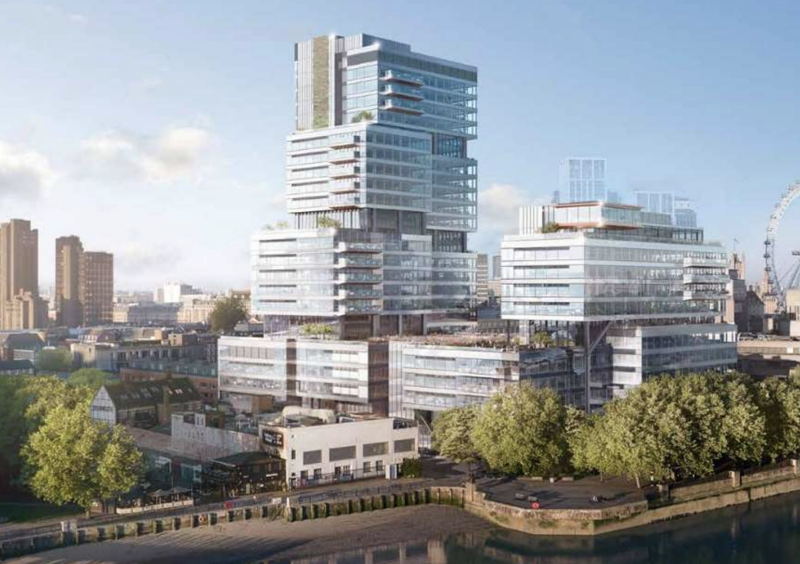 Members of Lambeth's planning applications committee approved the scheme by 6 votes to one at a meeting held at Lambeth Town Hall on Tuesday night.

In 2019 ITV sold office and studios complex on Upper Ground – built in the 1970s for London Weekend Television – to Mitsubishi Estate London in a £145.6 million cash deal, having abandoned its own plans to develop a new HQ on the site.

Mitsubishi and development managers CO-RE appointed Make Architects to draw up a new office scheme for the site.

He said that the Mitsubishi scheme had "evolved significantly" during two years of discussions and "would provide high quality office floor space that prioritises wellbeing, sustainability and productivity for its future occupants".

Mr Oates explained that the massing of the development had been influenced by the need to avoid the protected view between Westminster Pier and St Paul's Cathedral, and the need to preserve the setting of Somerset House.

Concluding his presentation recommending approval of the scheme, Mr Oates said: "Officers consider that the public benefits of the proposal are such as to outweigh the low degree of less than substantial harm to designated heritage assets that have been identified."

Councillors heard that the Mitsubishi development would provide space for 4,319 jobs across the office, cultural and retail elements.

In a nod to the site's TV production history, the affordable workspace element of the scheme has been dubbed 'London Studios' and is intended to provide space for 'cultural production' in close proximity to the many 'cultural consumption' venues in the South Bank's "world-class cultural cluster".

The meeting heard from Dearbhla Molloy who lives in the Iroko Housing Cooperative – on the south side of Upper Ground – where several homes will see their daylight diminished by the development.

Ms Molloy said: "My living room where I spend the most of my time has one window. This development will reduce the light that enters my living room by 63.5% according to the developer's own estimate." She warned of a "drastic" impact on people's lives and health.

Tom Keller – a member of the board of Coin Street Community Builders and a resident of the Palm Housing Cooperative – stressed that locals objecting to scheme were not 'NIMBYs' and welcomed development, but highlighted that people living in social housing didn't have the luxury of being able to "up sticks" and relocate if their daylight and quality of life were to be reduced.

The National Theatre was represented at the meeting by lawyer Mustafa Latif-Aramesh who questioned the accuracy council officers' summary of Historic England's comments on the scheme and invited councillors to look at an image of the proposed building and say that it complemented the listed National Theatre and IBM buildings.

Stephen Black from development managers CO-RE told the committee that the former ITV Studios is "uninviting and makes no positive contribution to the South Bank experience.

"We want to change this. This is a unique opportunity to transform the eastern gateway to Lambeth."

He added: "We are trying to bring together the local community with workers and visitors to create a vibrant and dynamic destination for Lambeth on the South Bank."

Architect Frank Filskow of Make said that his design is "a direct response to the unique character of the South Bank with its iconic modernist cultural buildings".

He added: "This building is not a generic rectangular block – it's designed to have a sculptural form … it steps down to the river."

Chris Taylor of Young Creators UK, whose social enterprise had been involved in a pilot cultural project in the former ITV building, told councillors he welcomed "the pivot from a defensive closed-off structure to one that's open and culturally accessible and appropriate to young creatives and communities".

A statement from Bishop's ward councillor Jennie Mosley was read out. She described the proposal as a "major eyesore" that would "bring more harm than good to Waterloo and South Bank residents" including loss of light to local homes.

Her ward colleague Kevin Craig spoke in support of the principle of redevelopment on the site but warned that the current proposal would cause "immense harm" to local people and that the claimed benefits of the scheme could equally be achieved without such a "overbearing, bulky building".