The Juan MuÃ±oz retrospective has opened at Tate Modern for a three month run prior to a showing in Bilbao. 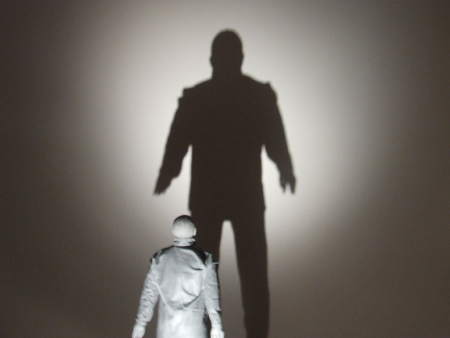 Sir John Tusa and former arts minister Chris Smith joined the many Spanish guests, including the Spanish Ambassador, at the opening party for the Spanish artist's first retropective.

Juan Muñoz is being regarded as one of the foremost contemporary sculpture and installation artists. His Double Bind was not only one of the first of the Unilever Series commissions for the Turbine Hall but the last great work before his death.

This exhibition, on both Level 3 and 4, features more than 70 works including his Raincoat Drawings made with chalk and ink on blackened gaberdine-raincoat fabric and portraying sparsely furnished rooms.

His installation can also be sparse such as The Prompter. This consists of a dwarf in a prompter's box looking at an empty stage apart from a drum. Here the gallery staff appear to be under orders to allow visitors to lean freely over the stage to peep at the figure.

In Room 10 you can wander freely among the hundred figures which comprise Many Times. The almost identical men stand in groups, one very large, looking happy and catching each others eyes. By joining them, maybe feeling outnumbered and an outsider, one can even in the silent gallery feel as if one is hearing a hubub of unintelligible foreign conversation. This is the highlight in a packed show.

The Hotel Declercq balconies on the concourse wall may have been named after a Ghent gallery but they are Spanish in feel. Crossroads Cabinets, an array of small sculpture, is inspired by a shop selling knives in Santiago de Compostela.