An ice cream van has been confiscated for blocking the red route and cycle lane on Westminster Bridge, the Mayor of London has revealed. 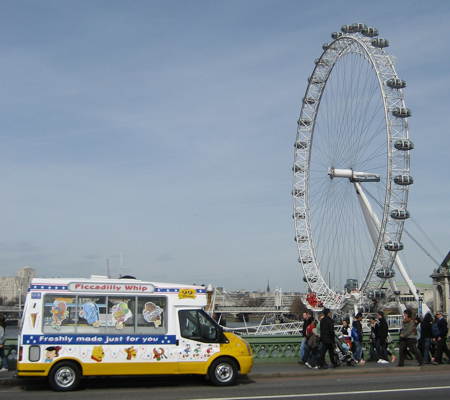 Illegal trading on Westminster Bridge has been a long-standing issue, with ice cream vans regularly parked close to County Hall.

Green Party London Assembly member Jenny Jones tabled a question to the Mayor of London asking what action Transport for London is taking to enforce the rule against parking on Westminster Bridge, particularly in connection with the ice cream vans that violate the red route, bus lane and cycle lane.

"There has also been an arrest and a seizure of an ice cream van for obstructing the red route.

"Enforcement activity is continuing. In addition, the MPS and TfL are working with Westminster and Lambeth Councils to look at further enforcement options and to find sustainable and effective solutions to the deal with illegal trading as well as the parking contraventions at this location."

We first reported on moves to deal with the nuisance caused by illegal traders on the South Bank more than 10 years ago.

Ice cream vans have been banned from trading in the streets of north Southwark since 1 November.