St Thomas Becket has been remembered with a ceremony on London Bridge. 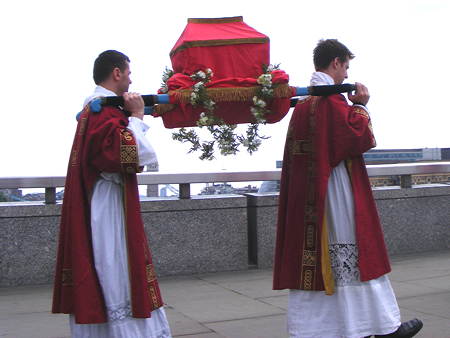 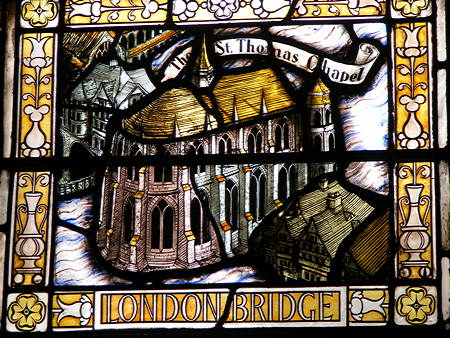 The special event at noon on Sunday anticipated the feast of the Translation of St Thomas Becket on Thursday which recalls the placing of the murdered Archbishop's remains in the Canterbury Cathedral shrine in 1220.

On Sunday morning a procession from St Magnus the Martyr Church in the City brought a relic of the martyr to the middle of the bridge's downstream side. The spot coincided with the position of a St Thomas Chapel which stood on the medieval bridge.

This chapel was within the St Magnus parish and today the church has a large model of the old bridge complete with its houses, shops and chapel. A stained glass window at St Magnus depicts the chapel.

Prayers were said invoking "glorious Bishop Thomas". On returning to the church there was an opportunity to venerate the relic.

Thomas Becket visited Southwark just two weeks before his murder by knights in Canterbury Cathedral at Christmas 1170. He was welcomed at the church now known as Southwark Cathedral and stayed the night in Clink Street.

Following his death, London Bridge and Borough High Street became the start of the pilgrimage route to his shrine. St Thomas' Hospital is named after Thomas Becket.

Later this month Southwark Playhouse is hosting a production of Four Nights In Knaresborough, a play by Paul Webb, about the Archbishop's assassins in the days immediately after the murder.