Storytellers embark on pilgrimage from Southwark to Canterbury

On a wet Wednesday morning a bedraggled group of walkers gathered in Talbot Yard to embark on a literary pilgrimage from Southwark to the shrine of St Thomas Becket tracing the route taken by Chaucer's fictional pilgrims in the Canterbury Tales. 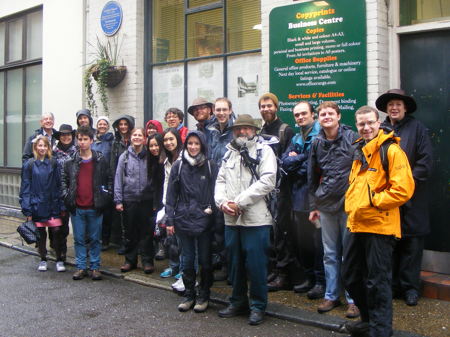 The 65-mile four-day walk has been organised by Henry Eliot, editor of Curiocity magazine. His 20-strong group is raising money for the National Literacy Trust and has already attracted sponsorship of more than Ł7,000.

The pilgrims are a mixture of Chaucer lovers, walkers, medievalists and storytellers. They assembled outside Copyprints Business Centre in Talbot Yard where a blue plaque, unveiled by Terry Jones in 2003, records the the site of the Tabard Inn which was the meeting point for the pilgrims in Chaucer's tales.

Eliot believes that 18 April 2012 is the 625th anniversary of the day that Chaucer set the beginning of his collection of stories.

The group is staying in the same towns as Chaucer's pilgrims and retelling the tales along the way. Their first stop was at the Thomas a Becket bar in the Old Kent Road where the Knight's Tale was told.

Each participant will retell one of the original stories, but in any style they choose and as faithfully as they like. The tales will be told in parks, pubs, churches and traffic islands.

You can follow the group's progress on Twitter at @Canterbury2012. They hope to arrive in Canterbury on Saturday in time for a special welcome at Canterbury Cathedral's Choral Eucharist on Sunday morning.

• To sponsor Henry and his companions, visit www.justgiving.com/canterburytales2012