A new book on the history of Harrods has revealed that not only was the famous Knightsbridge store founded in Borough High Street but it began as a drapers rather than a grocer as widely claimed. 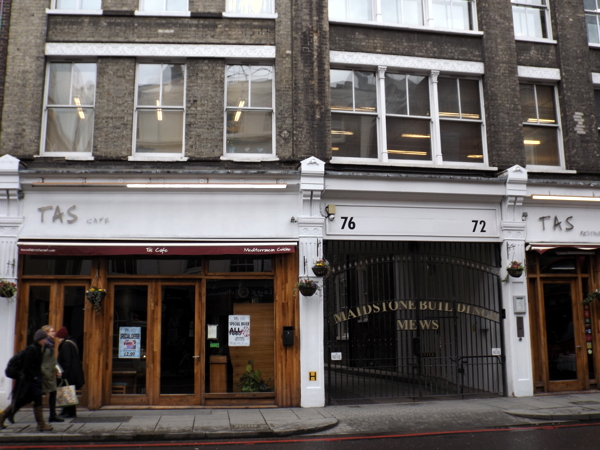 Today the site is occupied by Tas Cafe which is on the south side of the archway entrance to Maidstone Buildings Mews.

The discovery has been made by Charles Harrod's great great grandson Robin who has undertaken detailed research both in the Southwark Local History Library and the Harrods archives.

His many leads resulted in a meeting with Duncan Field of nearby Field & Sons who until recently retained valuable records of the High Street buildings.

Charles Harrod's business appears to have needed an injection of money. For a short time he went into partnership and the shop was known as 'Harrod & Wicking, Linen Drapers, retail'. Borough High Street was the place to go for cloth so competition may have been strong and money short at the time of the 1825 financial recession.

Clive Harrod thinks that the partner was probably wealthy James Wicking who had an interest in the Half Moon inn, just south of the Blue Eyed Maid.

Charles was just 25 years old when he opened the shop and it was whilst in Southwark that he married 19 year old Elizabeth Digby from Essex.

In 1832 Charles moved his business to the north side of the City where he traded as 'Harrod & Co, Grocers'. Shortly afterwards he relocated to Cable Street. He arrived in Knightsbridge in 1854.

The author attempts to discover the reason for Charles Harrod choosing to open in Southwark and reveals other family members in the area. It appears that a relative had worked in an excise office in Borough and the brother of Charles was running a jeweller's shop in Tooley Steeet when the draper's opened.

Whilst running the shop in Cable Street, Charles was charged with receiving stolen goods. A bag of currants on sale was found to have been accepted from a wholesaler without payment.

He was saved from jail and deportation by character testimonials from several people including tea dealer Charles Walker of London Road at the Elephant & Castle.

Much later a Harrods shop existed at the Elephant & Castle. In the early 20th century Charles and Elizabeth's son Henry opened his own grocery shop called 'H.D. Harrod' at 7 Newington Butts, a few doors down from the old Elephant & Castle tavern.

• The Jewel of Knightsbridge by Robin Harrod is published by The History Press; Ł20