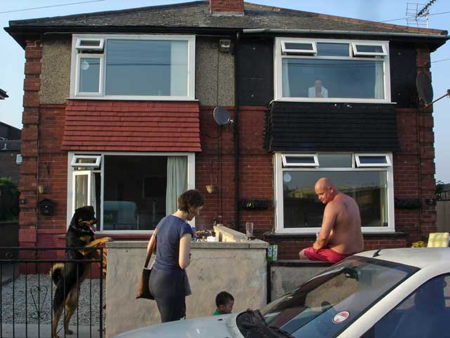 The CJET Photographer of the Year competition has attracted thousands of entrants from the UK and countries as diverse as India, Pakistan, Sri Lanka, Nigeria, Saudi Arabia, Romania, Italy, the United States and Canada.

A requirement for entry to the competition was that entrants do not work as photographers. All entries had to be taken on a camera phone. The stunning images submitted include scenes of extreme poverty in India, anti-Government spending cuts protests in the UK and terrorist bomb attacks in Nigeria.

The Winner of the Street Photographer of the Year Award is 23-year-old Kheoh Yee Wei, from Leeds, a graduate in electronics and nanotechnology engineering who works at a nanotechnology company. Describing his winning photograph he says: "The mum and her child were strolling on the streets of a neighbourhood in Leeds, passing by a family that was having a barbecue at that time. It turns out that they had a huge dog that kept jumping-up in excitement. That was when I knew I had to stop and capture a candid street photograph." Kheoh won a state of the art Olympus LS-20 camcorder.

Runner up Pete Smith, 42, spotted a girl on the 'Boris' bike at some traffic lights on Oxford Street in London. He says: "She looked so determined but at the same time petrified – it was a real chance moment and luckily I was able to capture it on my phone because it's always on me." Smith works in the production department for a media company.

In third place is Daniel Holland, 31, whose image was taken on a Sunday 1morning near his house in Bromley. He says: "I think the elderly gentleman in the photo spends a lot of time in that café where he's pictured. He seemed very comfortable in it. There were quite a lot of people causing noise outside which he didn't seem to approve of. I think his expression tells it all." Daniel is a former brewery worker who lives in Bromley, London, and now spends his time doing amateur photography.

CJET is a UK charity that encourages the personal development of disadvantaged young people through journalism, writing, literacy, photography and video. Deborah Hobson, Deputy Editor of The Latest.com, and supporter of CJET says: "Community based journalism is a powerful vehicle to further develop the personal and social skills of young people by giving them the ability to think critically about the world and express their ideas in a clear and collaborative way. Through the photography competition and exhibition we hope to engage with more of these young people and encourage them to be involved in the civic life of their communities through the arts."