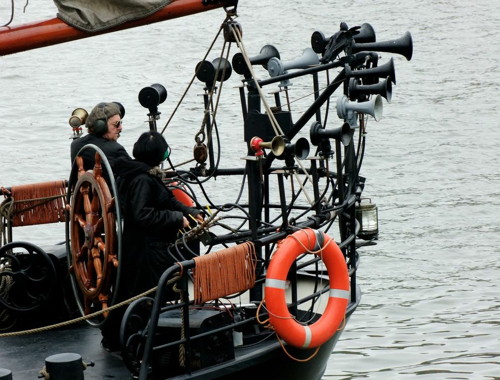 The centrepiece of The Mayor's Thames Festival, this is a spectacular, specially composed performance for the Thames by Richard Wilson RA, twice nominated for the Turner Prize, and Cultureship directors and artists, Zatorski + Zatorski.

Historic vessels are modified to become marvellous musical instruments and sculptural pieces in themselves, resurrecting the lost sounds of the river with steam whistles, bells, horns hooters, sirens and canon.

The day-long performance starts at sea near the mouth of the Thames Estuary, when a lone ship makes its way upriver to join the other mustered vessels at Trinity Buoy Wharf, home of London's last lighthouse.

The fleet will then go on to present a dazzling finale of sound, light and steam at Tower Bridge later that night.

The vessels will bring back the historic sounds of the Thames as they perform a live, moving, operatic concerto against the stunning backdrop of one of the world's most famous bridges.

The ships' opera will be conducted, by semaphore, from the top of the Trinity Lightship, a lighthouse on top of a ship.