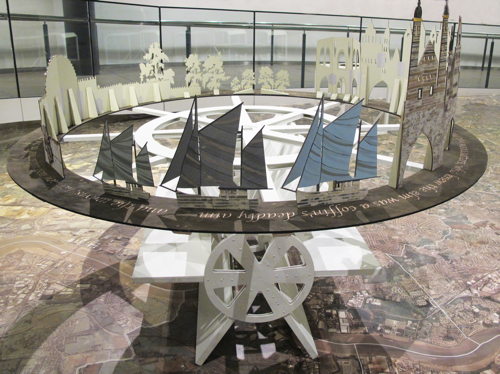 This exhibition - open to the public during National Tree Week - reveals the elm tree’s special relationship with the capital’s built environment, crafts and biodiversity and its fascinating London story.

Before Dutch elm disease swept through Britain, the elm was an everyday sight to Londoners. Its water resistant wood was used to underpin the arches of Old London Bridge, elm pipes carried water to the capital, Henry VIII’s doomed queen Anne Boleyn was buried in an elm coffin, while thousands of lesser mortals met their end on the gibbet of the Tyburn elm. It was also a vital part of the capital’s biodiversity, with such rare wildlife as the White-letter hairstreak butterfly depending on it for survival.

The exhibition has been organised by The Conservation Foundation and created by designers Rebecca Lucraft and Tom Stables.

A special event on Tuesday 2nd 12.30pm-2pm will see craftsman Keith Pettit demonstrating carving with elm and the wood’s unique grain. Visitors can pick up a special map revealing more of London's elm heritage and places to visit.

The exhibition is supported by the Heritage Lottery Fund and is helping to celebrate the Mayor of London’s RE:LEAF campaign and its work to protect the capital’s trees and encourage individual Londoners, businesses and organisations to plant more trees.

Many people still remember when millions of elm trees were lost to Dutch elm disease in the 1970s, transforming London’s landscape. However their legacy lives on in the names of our streets and places, such as Nine Elms and Seven Sisters, which recognise the formidable species that once towered above them.

The capital is also still home to many surviving elms in our streets and parks, improving our biodiversity by providing important habitats for other rare species. However as part of the Ulmus Londinium project The Conservation Foundation is providing schools and groups in London with free native elm saplings as part of an experiment to unlock the mystery of why some elms survived a deadly disease that wiped out millions. To find out more on receiving free saplings contact [email protected].