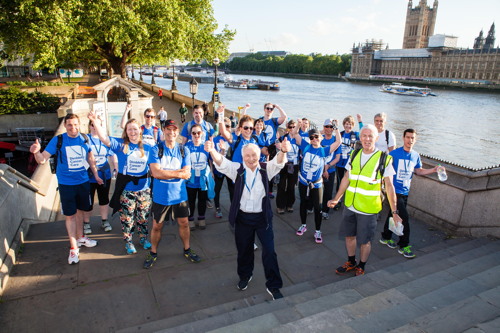 To celebrate the 50th anniversary of the charity Dimbleby Cancer Care, broadcaster Jonathan Dimbleby is inviting you to join him as he leads a 50km night-time walk through London taking in the city's famous sights.

This year marks the start of the 50th anniversary of the charity which was set up in 1966 in memory of broadcaster Richard Dimbleby and is based at Guy's and St Thomas' hospitals here in SE1. It provides practical and psychological support to people living with cancer and to their families and carers.

Jonathan said: "2015 was our inaugural year for the event. It proved to be a great success, raising £95,000. We received so much positive feedback from everyone who took part that we have decided to hold it every year now. Last time we had 100 walkers but this year we hope to break the 200 barrier.

"I had a terrific time last June. It was wonderful to see the city on foot on a summer night. I got a chance to meet and talk to some of our supporters who have played such a key part in helping us reach our fiftieth year of working in the South East London community.

"If I could offer one tip to people who want to join me, do plenty of walking beforehand. It is not a killer but it is a challenge. As I have found, a little training helps you go a long way."

Starting in the evening, participants walk from St Thomas' Hospital along the river, past Battersea Park and onto Putney Bridge, before walking up the Kings Road to Sloane Square and back along the north bank of the Thames to Tower Bridge. The route then goes out through Docklands, through Canary Wharf and Greenwich foot tunnel, before finishing at Guy's Hospital. The walk's route takes in various landmarks throughout London.

All the money raised will go towards the charity's 'Care for the Future' appeal, which aims to raise £500,000 by the end of 2016 so that it can continue and expand its work within the cancer community.