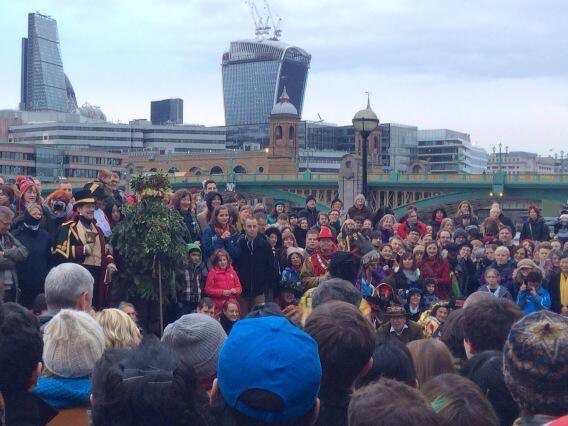 The Lions part invites everyone to a celebration of the New Year, mixing
ancient midwinter seasonal customs and contemporary festivity.

To herald the celebration, the extraordinary HOLLY MAN, the winter guise of the GREEN MAN (from our pub signs, pagan myths and folklore), decked in fantastic green garb and evergreen foliage, is piped over the River Thames, with the devil Beelzebub.

THE BANKSIDE WASSAILS
With the crowd by Shakespeare’s Globe, led by the BANKSIDE MUMMERS and our London Beadle, the HOLLY MAN will 'bring in the green' and toast or 'WASSAIL' the people, the River Thames and the Globe (an old tradition to encourage good growth).

THE MUMMERS' PLAY
The MUMMERS will then process to the BANKSIDE JETTY, and perform the traditional 'freestyle' St. George FOLK COMBAT PLAY, featuring the Turkey Sniper, Clever Legs, the Old 'Oss and many others, dressed in spectacular costumes. The play is full of wild verse and boisterous action, a time-honoured part of the season recorded since the Crusades.

KING BEAN AND QUEEN PEA
CAKES distributed at the end of the play have a BEAN and a PEA hidden in two of them. Those from the crowd who find them are hailed KING and QUEEN for the day and crowned with
ceremony. They then lead the people through the streets to the historic GEORGE INN,
Southwark, for a fine warming-up with the FOWLERS TROOP, STORYTELLING, the KISSING WISHING TREE, DANCING and MULLED WINE.