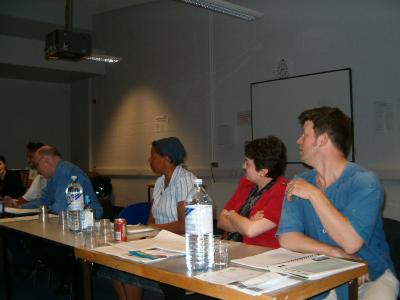 The meeting was organised by Southwark Cyclists and Lambeth Cyclists, local groups of the Great Guildford Street-based London Cycling Campaign.

Labour's Val Shawcross, the sitting Lambeth & Southwark Assembly member, said that those who support Ken Livingstone have to remember that he needs Labour assembly members who will support his budget.

On transport she said that extending free travel to under-18s in education would encourage good practice and also spoke about her campaign to improve overground stations which do not fall within Transport for London's remit.

Green candidate Shane Collins called for a physical barrier between cars and cycle lanes and an increase in bike use.

Liberal Democrat Caroline Pidgeon admitted to being an occasional cyclist but said that it was necessary to build confidence for people wanting to cycle in Southwark.

Respect candidate Janet Noble strongly attacked the private bus companies and called for a one pound flat fare on the Underground.

Independent candidate Navindh Baburam, stressing that he was a cyclist and not a car owner, promised to actively promote cycling.

• Election Day is Thursday 10 June which is also polling Day for the Mayor of London and Members of the European Parliament.
• See our Election 2004 page for pictures of all the Lambeth & Southwark candidates and links to their websites.