Plans for a 21-storey tower on a back street near the Elephant & Castle have been approved by Southwark councillors. 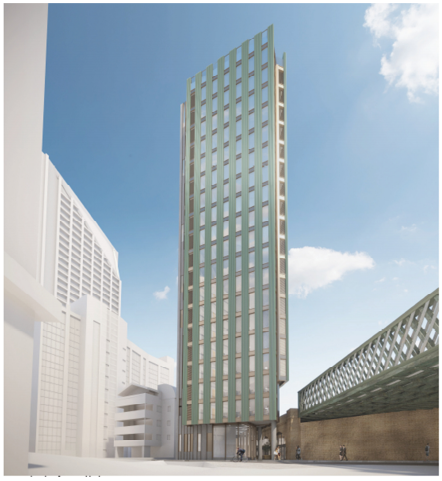 The scheme has been designed by ColladoCollins architects for Waterloo-based developer Joseph Homes.

The development – on a triangular site bounded by Rockingham Street, Tiverton Street and the railway line – could provide around 500 new jobs.

Planning officer Yvonne Lewis told councillors that the proposal did meet the tests of Southwark's tall buildings policy, and that the tower would be "viewed and experienced in the context of a cluster of tall buildings" at the Elephant & Castle.

The committee heard from objectors led by Metro Central Heights resident Claire Sinclair who said: "We think this building is just too tall."

Ms Sinclair argued that the site – which is away from the main road – was not suitable for such a tall building.

She said that Metro Central Heights residents were contemplating legal action to block the scheme.

Craig Carson of Joseph Homes told the committee that his firm was putting forward an "exemplar" scheme for a brownfield site.

"We believe that this building is of exceptional architectural quality," he said.

"As ward councillors we have significant reservations," she said, adding that the tower would have an impact on daylight and sunlight for some homes on the Rockingham Estate.

According to Michael Tsoukaris, the council's design and conservation manager, the location is "clearly identified as suitable for tall buildings" in planning policy.

He confirmed that planners believe that the scheme would cause "harm to the setting of Metro Central Heights".

"We think that that harm is less than substantial," he said.

The committee resolved to grant planning permission with six votes in favour and two abstentions.

A 13-storey residential scheme was approved in 2014 but the site has remained vacant since then.