David Page, chairman of Real Greek owners Clapham House Group, has lost his bet that the new Bankside restaurant would not take £50,000 a week before Christmas. He rashly promised to run across Tower Bridge naked if he was wrong. 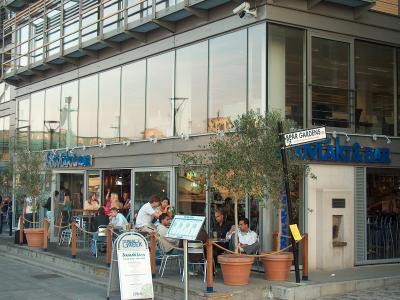 The packed terrace at the Real Greek's Souvlaki & Bar alongside Bear Gardens indicated good trade in July. Last month whilst on holiday Page was informed that he has lost the bet.

His City colleagues have been offering helpful suggestions including running naked inside a van which could be driven over the Thames. After contemplating the price of his venture's success he has now decided to hire the high level walkways above the bridge and make a quick dash across the river, wearing a billboard to preserve his modesty.

The event takes place early this week and photographic and video evidence will be available. Page will also make a Ł500 donation to charity.

However Real Greek founder Theodore Kyriakou – who lives in Bermondsey and is also the founder of Livebait – will not be there. "A bet is a bet but I will be taking a holiday to avoid the display" he says diplomatically.

David Page is a former chief executive of Pizza Express . The Clapham House Group acquired the Real Greek in December 2003 and the Bankside Souvlaki and Bar is the first stage of an expansion of the brand.