The Shell Centre on the South Bank came alive with the sound of music last week when 150 children from four local primary schools joined the Southbank Sinfonia and took part in a free concert. 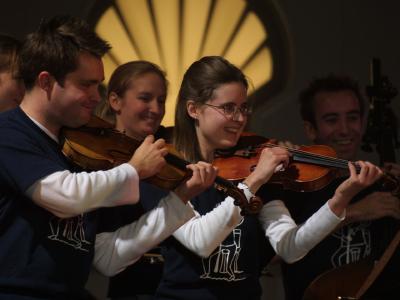 The Southbank Sinfonia, an orchestra based at St John's Waterloo, which comprises talented players from UK music colleges, is involved in outreach workshops – partly sponsored by Shell – which aim to take music to younger audiences.

All four schools – including Friars Primary in Webber Street – have been working with the orchestra over the last year and the highlight was in this concert  which  was staged in order to bring music to a greater number of schools in the Lambeth and Southwark and link Shell to the community.

More than 700 pupils from 14 primary schools attended the lunchtime concert. Also in the audience were parents, teachers, invited guests and Shell staff.

The orchestra played a six-part piece by contemporary composer Cameron Sinclair, accompanied by the children, all aged between 10 and 11 on percussion. The performance will be led by Kevin Hathway, principal percussionist of the Philharmonia, who is highly-renowned for his energetic and engaging approach to music-making with children.