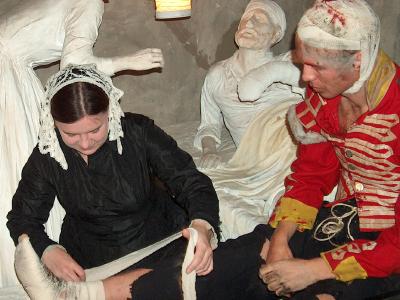 Florence Nightingale tends the wounds of a soldier in the Crimea

The museum's space for temporary display is modest but the staff are proud of Calamity Unparalleled: Order out of chaos, an exhibition which offers new perspectives on Florence Nightingale's role in in the hospitals of the Crimea.

Key exhibits include a Turkish lantern used at Scutari and the register of nurses, containing the names of 229 women who served in the British military hospitals. Athena – Florence Nightingale's pet owl, who died on the eve of her departure for the Crimea – has pride of place.

You can also see a miniature Book of Common Prayer given by Nightingale to one of the soldiers in her care. This is also the first chance to see a letter from Nightingale to the family of a deceased solider.

An interactive dispensary exhibit recreates many of the medicines used in the hospitals which are available to touch and smell. You can even try out a stump pillow.

The exhibition also considers how Florence's experiences in the Crimea shaped her legacy to nursing.

Calamity Unparalleled was officially opened by Sylvia Denton OBE, president of the Royal College of Nursing, who said that she hoped that "many, many people will come here to look beyond the myth" of the lady with the lamp.

• At the Florence Nightingale Museum until the end of April 2005