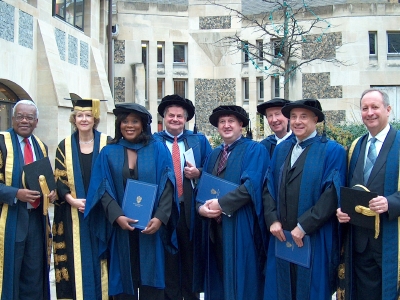 The honours were conferred at a ceremony in Southwark Cathedral, hosted by ITV newscaster Sir Trevor McDonald, chancellor of London South Bank University.

Olympic gold medallist Tessa Sanderson was awarded an honorary fellowship. George Barlow – chair of the London Development Agency and champion for the poor, unemployed and homeless – became an honorary doctor of letters.

There was also an honorary fellowship for Sir David Bell, chairman of the Southwark Bridge-based Financial Times and the creative driving force behind the Millennium Bridge.

An honorary fellowship was conferred on the Director of Audi Design Foundation Michael Farmer.