London South Bank University has revealed plans to transform Edric Hall in Borough Road into a new 200-seat theatre for drama students and community use. 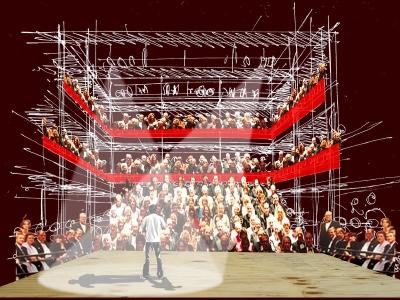 To coincide with the university offering two new theatre degrees this year, plans have been drawn up to change the hall into a space that could be used flexibly and offer students a practical experience required for their studies.

London South Bank University's Borough Road building formerly housed the Borough Polytechnic Institute and boasted a stunning assembly room, the Edric Hall, named after Edric Bayley, chairman of the institute's governing body from 1891 to 1905. In recent years it has been used as an examination hall and venue for concerts organised by the Cinema Organ Society on the Wurlitzer organ, which has now been removed from the hall.

"The courses give students a unique taste of what theatre life is like," says
Jonathan Banatvala, the University's pathway co-ordinator for Theatre and Performance. "They gain experience of all the pre-production work that is involved in getting a performance to the stage and the craft of the theatre. They don't just learn it, they live it as well."

To give these courses the home they deserve, work has been going on over the past few months to convert the existing hall into a 200-seater theatre, with a studio for fringe and try-out performances and its own cafe "This isn't just a project for students," explains Jonathan, "but something for the whole community. London is full of small theatres, such as the Battersea Arts Centre, and our venture will put our stage firmly on that map."

Over the summer work has been going on to prepare the hall for the renovations. Asbestos has been carefully stripped out, and a steel frame is currently being installed to support the structural changes going to be carried out.

The theatre is planned to open in August 2005 and when it does will offer a full programme of events that both the university and the surrounding community can enjoy. "One of the challenges of our Arts Management course is for students to work with artists and theatre companies to book a programme for the theatre. Some of this work will be experimental, others will be more mainstream, but all will add to the broad range on offer and build up the theatre's reputation as a great place to perform."