A map of London made up of the pieces of guns destroyed by the Metropolitan Police in a firearms amnesty last year is now on view to the public at City Hall. 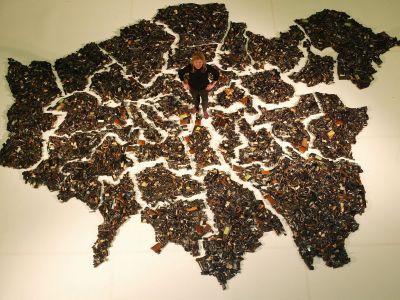 Following the gun amnesty of 2003 Lucy Wood contacted the Metropolitan Police to acquire a sizeable portion of the 3085 weapons that were handed in. Her intention was to create a piece of art about the individual possession of firearms and related crime that was relevant to the city and its population.

The title of Map 272183 refers to the Ordnance Survey grid reference for the 33 boroughs of London, an underlying concept of Lucy's work, which is formed from the debris and pieces of the guns that were broken up by the police. Measuring 8 metres by 6.26 metres, the installation consists of the various pieces of weaponry, which are laid flat and arranged to perfectly replicate the mapped area of each borough, as viewed from an overhead gantry.

Though the weapons were accumulated from London, they originated from all over the world and include such extraordinary pieces as an old WWII Bren gun and a solid lead pistol dating back to the eighteenth century.

The significance of the Metropolitan Police's decision to open the conference with Lucy's work is indicative of the fact that tackling gun crime remains a key priority. It is also reflective of the success of at least one of Lucy's aims, that Map 272183 might be used to start discussion and projects in education on anti-gun issues and how we deal with these issues in our communities and as individuals.

As Lucy remarks, "Guns contain a sense of fear and anxiety; yet give the holder a sense of superiority. However, once broken up into small pieces, the guns no longer serve any purpose. Instead, they offer a complex and powerful set of emotions to the viewer, invoking thoughts of broken down fear and risk: One now has the ability to turn their original purpose into a completely different agenda. Looking down on the broken guns gives them the status of the debris that they now are but it is a very sobering experience to gaze upon the fragments and imagine the torment that they might have wrought."