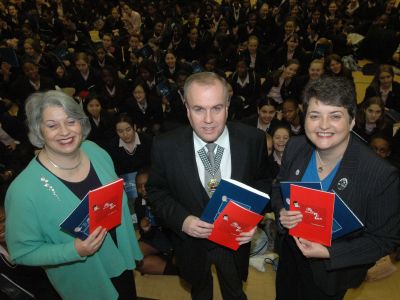 Ground-breaking educational packs to help children and young people learn how their city is run were launched last week at St Saviour's and St Olave's School in New Kent Road.

The packs contain booklets for children with facts and figures on all aspects about how London is governed, including the responsibilities of the Mayor and London Assembly members for transport and policing.  The booklets use activities, pictures and fact cards to get their message across.

Two packs have been produced and are directed at 10-11 (key stage two) and 14-16 (key stage four) age groups. The packs were put together with help from pupils from 11 schools across London including St Saviour's and St Olave's.

The capital's 3,000 schools will be able to get copies of the free packs, which contain teachers' notes and booklets for each child in a class.

"Today's young people are the voters of the future.  With turnout at elections at a historic low, we must engage young people as early as possible so that they don't share this generation's apathy.   I hope that if young people learn about the London Assembly now they will be more likely to vote when their time comes."