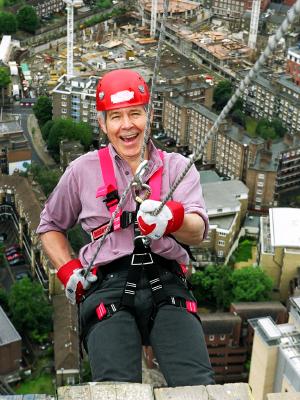 Guy's and St Thomas' chief executive Dr Jonathan Michael was one of 40 people to abseil from the top of the 469ft Guy's Tower in July to raise money for the Evelina Children's Hospital.

Trust chairman Patricia Moberly was amongst the first to congratulate Jonathan Michael on his Knighthood: "We are absolutely delighted to learn of Dr Michael's Knighthood. This is primarily a richly deserved personal award that honours his lifetime of commitment to the National Health Service.

"We knew when he joined Guy's and St Thomas' in late 2000 that we had found a Chief Executive of rare quality, and this has been amply demonstrated during his past four years with us."

Dr Michael trained as a doctor at St Thomas', qualifying in 1970, long before the hospital joined wwith Guy's. He spent the next ten years training as a physician specialising in kidney disease. Having worked as a junior doctor at both St Thomas' and at Guy's he describes himself as "one of the few people who went between the two hospitals without a passport".