Archbishop speaks to the nation from Tate Modern

Archbishop of Canterbury Rowan Williams has delivered his televised New Year message from the Shrinking Childhoods exhibition on the south lawn of Tate Modern. 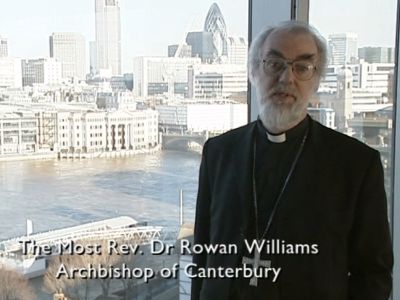 The Archbishop began his message inside the gallery overlooking the Millennium Bridge: "It's quite a view. Whether or not you like modern art, this is surely one of the most memorable sights you'll see here at the Tate Modern. You'll hear people say, 'You can see everything – St Paul's, the sweep of the river, the City, the Globe Theatre..."

He continued: "Come downstairs, right down to ground level: here is what the big picture doesn't show you, the shadow side of the stunning view up at the top. Behind the Tate is this exhibition of children's art – art by children whose entire experience has been abuse, violence and poverty." 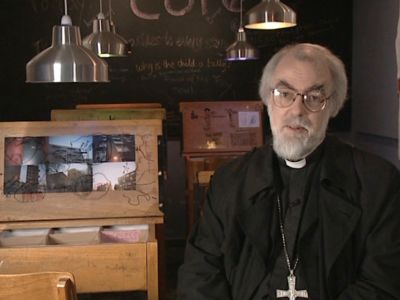 The broadcast was focussed on the Shrinking Childhoods exhibition, organised by Peckham-based charity Kids Company, which continues until 17 February 2005.

More than 1,000 children communicate their own experiences through art in this exhibition, which aims to provoke a national debate on the nature of childhood in Britain today. 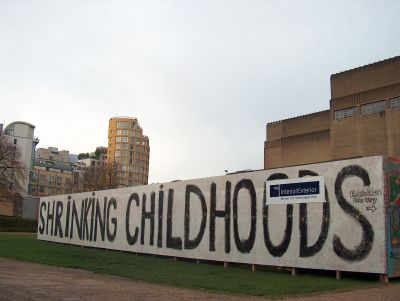 The art on display is the result of a series of workshops held over the summer at Tate Modern and Kids Company involving more than 1,000 children aged between four and 21. A number of London schools took part and the young people had the support of trained staff as they created material for the event. 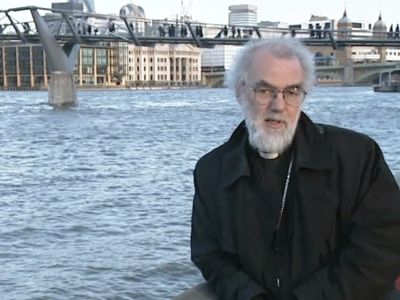 Standing on Bankside in front on the Millennium Bridge, Dr Williams concluded by saying: "So as we think about the coming year, let's not spend all our time on trying to perfect the huge plans that will change everything. We ought to be asking, 'What's the difference I can make to this situation, this person, to myself, to someone close, to someone whose face I know?' The biggest picture we could ever hope for is the sight of what the human heart is capable of when complete love and trust are allowed to touch it. Think global, act local, they say: what's the difference only I can make, however small, here in this place at this time."

• Archbishop of Canterbury
• The Archbishop's message is repeated at 1.05pm on 1 January on BBC One.