This is mainly an exhibition of the Thames in the capital but with the added interest of some Venetian views to compare with London.

The show starts with Turner's Moonlight study at Millbank, his very first attempt with oils, which shows a view "downriver towards the roofs and chimneys of Lambeth". This may mean upstream.

"What is the exact position of the artist on the riverbank?" must be the constant question asked by the visitor who knows today's Thames. Most intriguing is Whistler's The Pool showing a bridge and two towers. Which bank is Southwark? 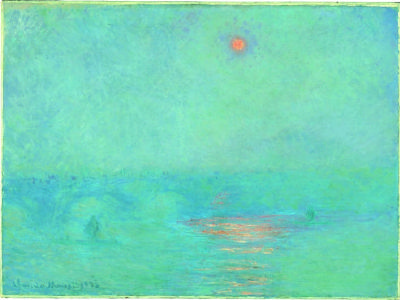 Certainly those chimneys highlighted in 1797 by Turner feature in many paintings over the following century. Monet's two Waterloo Bridge oils have heavily smoking chimneys across Waterloo and his Effect of Sunlight on the Fog 1903 shows the pollution drifting from the South Bank.

The landmark tower in Whistler's views of the South Bank from his Savoy bedroom is always the shot tower which still stood alongside the Royal Festival Hall during the Festival of Britain.

Turner's London From Greenwich Park illustrates clearly how St Paul's Cathedral stood out above Southwark. This is the artist who best went on to record the modernisation of the riverside and the building of new crossings. 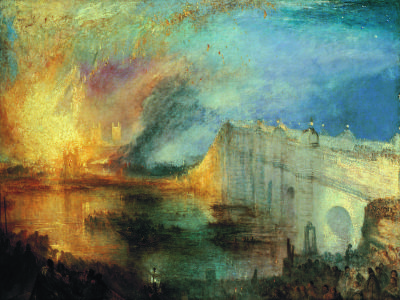 The star of this fascinating exhibition musy be Turner's Burning of the Houses of Lords and Commons, 16th October 1834. The crowd on the South Bank is bathed in dramatic light as if the occasion is a regular fireworks display.

Vistors should remember that this important exhibition is not on Bankside but at Tate Britain on Millbank. However, those who walk back over Lambeth Bridge and east along the Thames Path to the Pool of London will be richly rewarded by then being able to seek out the views chosen by Turner, Whistler and Monet.