Smoking ban kicks in at Guy’s and St Thomas'

With smoking being banned in both Guy's and St Thomas' Hospitals, this change is certain to stir up strong opinions. Surprisingly some smokers seem to support the ban. 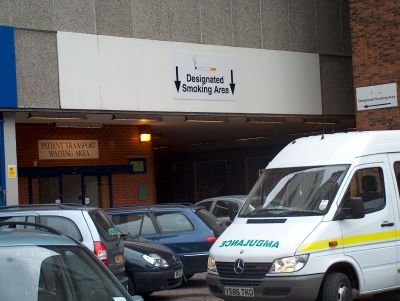 Jean French, an older woman who was enjoying a smoke outside the main entrance with her friend, Linda Hopben, praised the hospitals' actions, saying, "I think it's a grand idea!" She motioned to Miss Hopben, seated in a hospital wheelchair next to her, "Right now my friend can only have a cigarette when someone comes to visit her, because she can't walk."

She went on to explain that, with the new smoking areas, the patients will be able to smoke whenever they want to. "It's just not good having it here," she declared, referring to hospital's entrance, full of patients and visitors smoking right in front of the doors.

Miss Hopben added that it simply wasn't right for non-smokers to be forced to walk through the cloud of smoke hanging over the entrance. "It's just not fair, with all the smoke blowing in through the doors and all," she said.

"I agree with the smoking shelter being over there," she said, pointing at the overhang just a few metres to the side of the entrance, "they bring the patients right through here, even premature babies."

At this, her visiting friend nodded in agreement. "We're too old to be silly," she said with a smile, "we know [smoking] isn't good for us, but there's no reason for other people having to deal with it."

Both of these smokers were in favour of the changes, and even thought that all hospitals should follow suit, just as long as they all provided places for smokers to go.