Paramedics on a trolley bed dash and accountants releasing red balloons - it was all part of Red Nose Day 2005 in SE1. 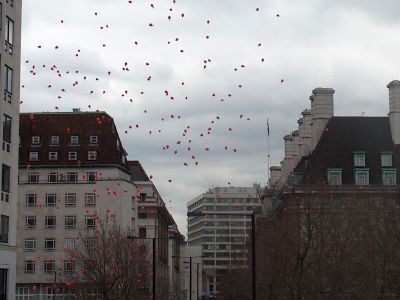 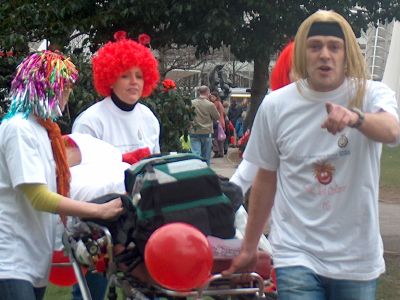 Three teams of London Ambulance Service staff from Waterloo took to the starting line at the London Eye for a trolley bed dash around famous London landmarks to raise money for Red Nose Day 2005. The paramedics and emergency medical technicians swapped bandages for big wigs and big red noses as they pushed decorated trolley beds, complete with flashing lights and whirring sirens along a circuit that takes in some of the capital's most famous sights

Each team had to visit the London Aquarium, the Imperial War Museum, London Dungeon, Horse Guards Parade and Leicester Square. They were tasked with collecting various items along the route including used theatre tickets and tacky London souvenirs but most importantly, they were trying to collect as much money as they could for Comic Relief. The winning team was the first to return the London Eye and push their trolley bed aboard one of the capsules for a victory lap of the wheel.

Debbie Casson, a Waterloo duty station officer who has helped to organise the event, said: â€œThere is a healthy amount of competition between the three teams going into this race with many staff having been in training for weeks but there will be only one real winner – Comic Relief."