A suit belonging to the last Pearly King of Bankside has been donated to Southwark's Cuming Museum this week. 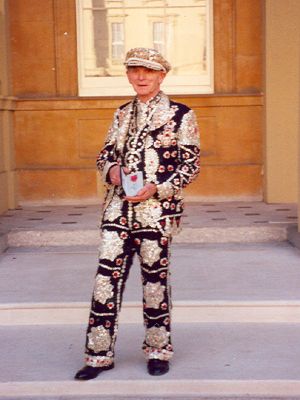 The suit, which has kindly been donated by the owner's daughter, belonged to Southwark resident Tommy Johnson MBE who died in 2002. The present-day Pearly King of Bow Bells officially handed over the suit at the ceremony on Wednesday, accompanied by members of Tommy's family.

Stephen Douglass, Head of Museums at Southwark Council, said: "We'd like to thank Tommy's family for their kind donation, as the suit will be a real asset to the Cuming Museum's collection and presents a wonderful opportunity to tell the story of Southwark's Pearly Kings and Queens for the future.

"Their donation is particularly good timing as it comes at the start of National Museums and Galleries Month, which celebrates museums around the UK. We're extremely lucky that Southwark has a whole range of interesting museums and historical sites that are free to visit."