The Architecture Foundation, Urban Catalyst and the Igloo Regeneration Fund have selected Urban Salon as the winner of their architectural competition for affordable housing in Bermondsey Square. 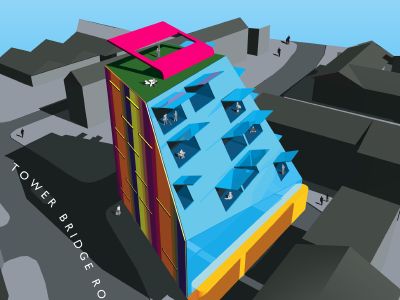 The competition, forming part of the Architecture Foundation's Home Project, follows a commission by the developer Urban Catalyst and Igloo, with the resulting housing due for delivery within two years. The scheme's backers say that it will be an exemplar in the ongoing debate about the provision of affordable housing in London and beyond.

The competition was launched in 2004 and is part of a larger, mixed use development being undertaken by Urban Catalyst in partnership with Southwark Council. Architects were asked to propose an approach that would address issues of desirability and aspiration in affordable housing design, with the intention of bringing fresh thinking to the field. Urban Salon was selected from a second round shortlist of three, including FAT and S333, for its intelligent, community-focused and ecologically driven response to the brief. The three practices were selected from a shortlist of eight, chosen from the 63 submissions originally received for the project.

The judges say that the Urban Salon concept scheme offers a new model of desirable housing that is at once high quality, private, eco-friendly and affordable, with the adaptability to accommodate changing living patterns. Large, south-facing flats, each with generous and opening double-glazed windows and terraces, ensure maximum views, sunlight and natural ventilation, and face towards residential streets away from busy roads.

The concept building has been designed with a community focus and incorporates the results of local consultation. Mediating in scale between the main Munkenbeck & Marshall designed scheme at Bermondsey Square and neighbouring housing estates, it aims to engage with surrounding spaces and communities as a catalyst for dense and imaginative urban regeneration. The initial designs include a graphic façade on the north and west elevations of coloured photographic laminate panels reflecting abstracted imagery of local buildings, which face onto the busier streets, enlivening the local streetscape and creating a landmark for Bermondsey.

Rowan Moore, director of the Architecture Foundation and chair of the jury, announcing the winner, said: "We wanted to bring fresh thinking to the concept of 'quality' in new housing. The response in the entries we received, and especially from the short-listed practices, went beyond our expectations. We eventually chose Urban Salon because they combined tangible benefits, such as space and view, with playful design and an understanding of the locality."