Mayor of London Ken Livingstone and photographer Yann Arthus-Bertrand have unveiled a giant aerial photographic image at More London to illustrate the impact of climate change. 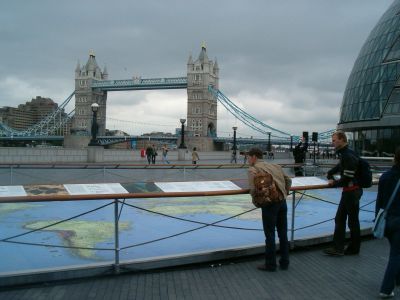 The unveiling marks the official opening of the London exhibition of Earth from the Air – a photographic portrait of our planet by Yann Arthus-Bertrand. It is an open air gallery 120 stunning images, capturing the state of the planet at the start of the 21st century. The launch coincides with the start of London Sustainability Weeks – an initiative promoted by the Mayor's office. London has set an ambitious target of becoming 'carbon neutral' by 2010 and there are significant concerns about the rising risk of flooding in wide areas of London as a result of raised sea levels and despite the existence of the Thames Barrier. 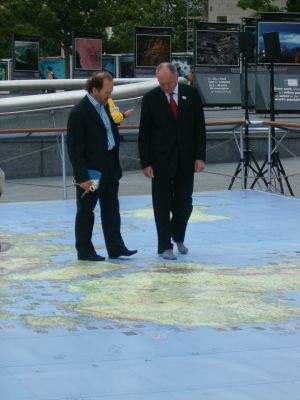 Its opening is boosted by the unveiling of 7 new images from his continuing project to record the state of the planet at the start of the new millennium. The exhibition has already inspired millions world-wide with its beauty and often hard-hitting impact.

The spectacular free outdoor exhibition of 120 giant aerial photographs has transformed the More London site into a gallery on a massive scale. 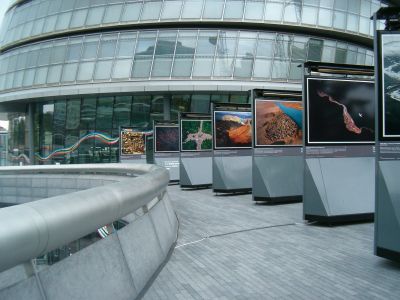 Seen together these photos are an outstanding visual testimony to the world we live in today and the joint threats from climate change and the ever-widening gap between rich and poor countries. Taken in over 100 countries, most of Arthus-Bertrand's photos were expertly captured by flying in helicopters over his subjects. The remarkable result is an exhibition of stunning aerial photographs with compelling narrative panels highlighting the issues each one illustrates.

Commenting on the exhibition, Ken Livingstone said: "This spectacular and thought provoking set of aerial photographs illustrate the relationship between human beings and our planet. I am delighted to welcome the exhibition to London in order to help reinforce the message that we all need to play a part in protecting the environment for future generations."

• Buy the book from Amazon.co.uk.