It's one of the worst eyesores in SE1, and now architects have put forward a speculative proposal to bring the former County Hall annexe in Westminster Bridge Road to life as a 'Green Island'. 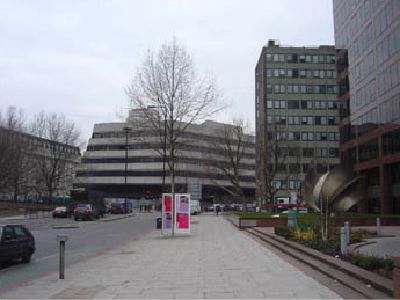 The island site as it is now

Studio E's Green Island proposal looks at how a derelict and redundant urban building can be brought to life as viable and stimulating development employing sustainable measures that are relevant, practical and can deliver carbon neutrality.

The old GLC island site building has been derelict and abandoned for many years. So far, despite much thought and several planning applications, no satisfactory solution has been reached for its development. Studio E Architects now take a fresh look at the potential of the site, applying to it radical sustainable measures. 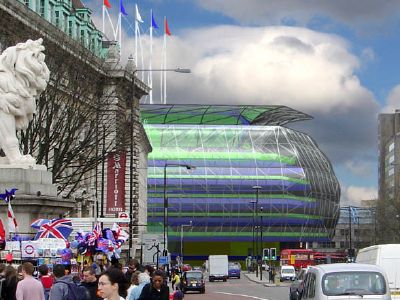 The plan envisages removal of the existing pre-cast concrete cladding and replacement with an enveloping, triple skin, transparent, membrane structure (ETFE as used for the Eden Project).

An open court would embrace the existing central core, providing natural light in the centre of the building.

A number of renewable energy sources would be integrated into the building fabric: pollution-free electricity could be provided by a photovoltaic array laminated to the ETFE roof hood, as well as wind turbines.

A key tenet of the proposal is the greening of the oppressively hard, solid structure. The architects go so far as to suggest the provision of fresh vegetables, fruit, herbs and other produce grown on the roof for the on-site restaurants and other local outlets.

The 'Green Island' proposal is a speculative one, so the current eyesore isn't likely to disappear any time soon.

Studio E's other work includes the new City of London Academy in Bermondsey.