Abseilers take the plunge for the Evelina Children’s Hospital

Hospital staff and local residents and workers took part in a daring abseil challenge down Guy's Tower to raise funds to buy vital equipment for the new Evelina Children's Hospital. 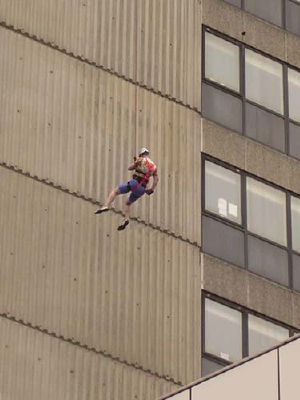 Richard French from the Foundation Trust's training department took it a step further by doing the 469ft abseil wearing a ballerina's tutu.

The design and build costs for this innovative new building are being met by a Ł50 million grant from Guy's and St. Thomas' Charity and Ł10 million from the government. The Evelina Children's Hospital Appeal is raising a further Ł10 million to provide medical equipment and furnishings for the new Evelina Children's Hospital. To date this new Appeal has raised Ł7 million since it was launched in January 2004.

• On Saturday 23 July there will be an opportunity to have a tour of the brand new Evelina Children's Hospital as part of the St Thomas' Hospital open day (11am-4pm).