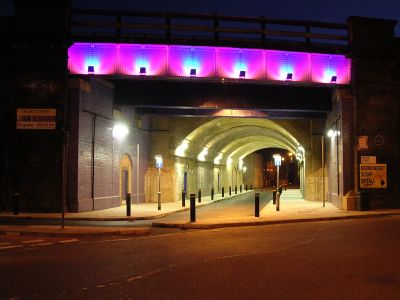 Bridges, tunnels and viaducts all over London have been neglected for years. Pigeon droppings, general pollution, poor drainage facilities, inadequate lighting all result in an environment that attracts other environmental crimes such as graffiti, fly tipping and vehicle dumping and personal safety and violent crimes. The three new tunnels projects will create new business and leisure spaces, and a safer and more attractive walking route to encourage north-south movement between the riverside district and residential neighbourhoods – thereby helping to spread the economic development and increased activity that has been seen north of the viaduct.

The traffic calming project seeks to alleviate community concerns about pedestrian safety on a housing estate currently bisected by a road which brings noise, pollution and danger from the fast moving traffic using the area as a 'rat run'. The project will see a partial closure of the road with the reclaimed road used to create a grassed outdoor area for those living in the estate who lack their own gardens.

The four projects stem from the PLP Tunnels and Arches Improvement Strategy and the PLP Public Spaces Strategy. Both strategies outline issues that affect the Pool of London area in terms of its public open spaces and walking routes. They also highlight key areas for improvements, many of which have already been undertaken over the last eight years of the Partnership. These four projects also complement the work being done as part of Transport for London's Local Safety Schemes, Walking Initiatives and Safe Routes to School, as well as Southwark's Light at the End of the Tunnel Strategy for the Viaduct, and over-arching regeneration strategies.