"The floors should be made of chocolate" 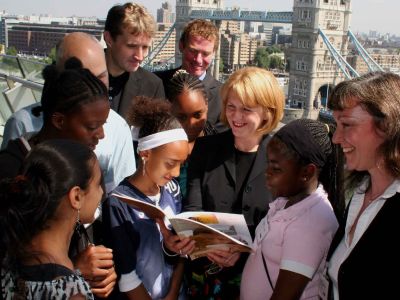 The minister hailed the report as leading the way in encouraging the authentic consultation of children, taking their views into consideration around developments in their community and helping them become active citizens.

"This project highlights the importance of consulting with children and young people and the benefits for them in terms of their own creativity, personal skills and academic achievement," said Beverley Hughes. "I hope that the report will promote not only the greater involvement of young people in their local communities, but also improved partnerships between culture and education. It's vital that such partnerships continue to develop if theatre, music and art are to be a real part of every child's life."

The new Unicorn Theatre is the first ever purpose built professional theatre for children in the UK. Unicorn is currently being built on Tooley Street and will open by the end of 2005 and play to over 100,000 children per year.

Unicorn's education team started the consultation in 2001 with a class of 30 eight year old pupils from Tower Bridge Primary School. The consultation ran for three years working with the same children (called Unicorn Young Consultants) as they moved through the school. The project was funded by the Pool of London Partnership.

The consultation was carried out to better understand how children experience theatre and ensure their thoughts were taken into account for the designs of the new theatre. The consultation was guided by Articles 12 and 31 of the United Nations Convention of the Rights of the Child, about listening to the views of children, and encouraging participation in cultural life and the arts.

The children involved have developed firm links with the theatre and are to act as Unicorn ambassadors during Unicorn's opening week, showing guests and visitors round the building to which they contributed their ideas.