Charles Saatchi has announced that his art gallery - which opened in County Hall in 2003 - is to relocate to Chelsea. The move follows a spat between the millionaire collector and County Hall&#39;s Japanese owners. 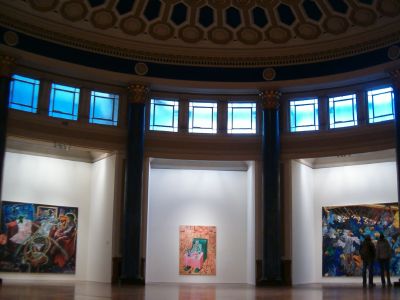 "We are very sad to be leaving County Hall because in many respects it's been a great success," said Mr Saatchi.

"The Duke of York's HQ Building, which will give us extremely large, well-proportioned rooms with very high ceilings, will create a perfect gallery to look at contemporary art."

"However, the behaviour of the landlord has made our long-term tenancy untenable. He has made the gallery staff despondent with an endless campaign of petty unpleasantness and we didn't feel the gallery could develop in this malevolent atmosphere."

Makota Okamoto, European head of the Shirayama Shokusan Corporation, has been accused of changing the locks on the gallery's sole disabled lavatory, and even kicking an artwork by Gavin Turk. Gallery staff report being sworn at when they failed to recognise Mr Okamoto.

Mr Okamoto was at the centre of an earlier row in 2002 when he refused members of the Royal British Legion access to lay a wreath at the building's war memorial.