There may be a different fish to see for every day of the year at the London Aquarium at County Hall, but now there&#39;s a new variety that has never swum any of the world&#39;s oceans. 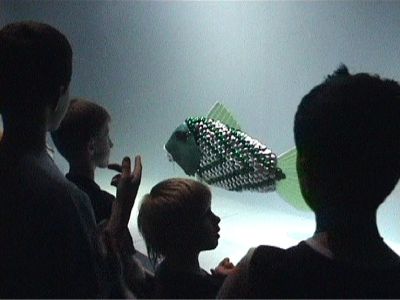 Three stunningly beautiful robotic fish have been created with jewel-bright scales and sinuous, astonishingly life-like movements. They have been produced by Professor Huosheng Hu and his human-centred robotics team of the Department of Computer Science at the University of Essex.

Professor Hu's team have been working with the London Aquarium for three years to develop a biologically inspired robotic fish which mimic the undulating movement of nature's fish species – aiming for the speed of the tuna; the acceleration of a pike, and the navigating skill of the eel.

The robotic fish have sensor-based controls and autonomous navigation capabilities – they can find their own way around the tank safely, avoiding the objects, and react to their environment. The results of years of painstaking work can now been seen in freshwater tanks next to the London Aquarium's Atlantic tanks.

Professor Hu is an expert in the field of robotics and was the mastermind behind the Essex robotic football team who won the 3rd prize in the RoboCup simulation league in 1999. The robotics group at Essex is one of the largest in the UK and is at the cutting edge of research into human-centred robotics.

According to Professor Hu, the aim of the project is to bring the public in direct contact with robots, increasing their understanding of science and technology. "This work has many real-world applications including seabed exploration, detecting leaks in oil pipelines, mine countermeasures, and improving the performance of underwater vehicles."

"Our robotic fish are really wonderful to look at and very entertaining," commented Foster Archer, director of the London Aquarium. "It's amazing how beautiful and graceful their movements are – they're going to be incredibly popular with our visitors."