The Norwegian Royal Yacht Norge has anchored in the Pool of London. 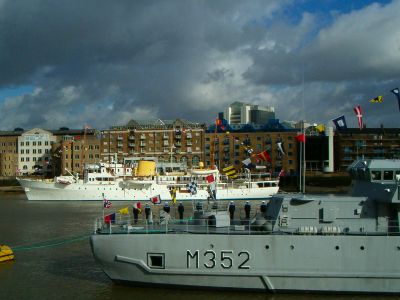 The King and Queen of Norway have disembarked to sail upstream on the PLA launch Royal Nore to Millbank Pier.

Earlier Princess Anne had boarded the Royal Yacht to welome her Norwegian relations and escort them on the river trip prior to meeting the Queen on Horse Guards Parade at the start of the State Visit. Afterwards there was a carriage procession to Buckingham Palace.

Their Majesties are paying the State Visit to mark the centenary of Norway's independence which was achieved without violence. This week a hundred years ago the joint kingdom of Sweden and Norway came to an end when Sweden recognised Norway as an independent country. 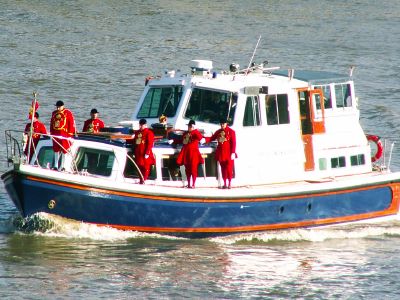 During this week's anniversary visit the King and Queen are accompanied by Crown Prince Haakon and his wife Crown Princess Mette-Marit.

It is understood that at the end of the visit the Norwegian Royal Family are hoping to give a farewell lunch on board the Royal Yacht for the Queen and Duke of Edinburgh.

During the trip upstream the King and Queen passed Southwark Cathedral where this week Norwegians and Swedes living in London will be attending a service marking the dissolution of the union and Britain's recognition of independent Norway.

Also anchored in the Pool of London, at Butler's Wharf, is the Norwegian naval escort vessel Rauma.